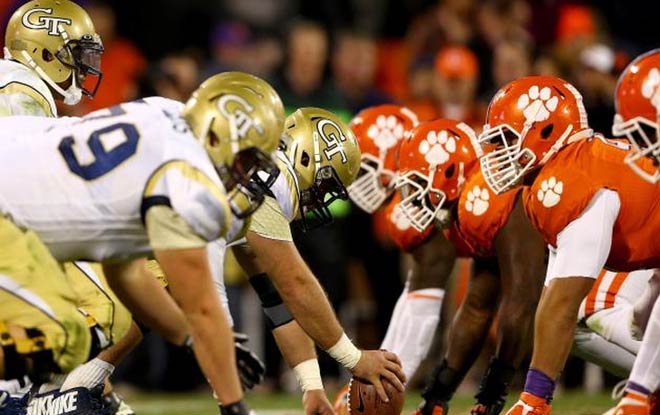 Top betting sites expect Tigers and their fearful symmetry to start next season the same way they finished the last. So much so that the best online sportsbooks favor Clemson over Georgia Tech by 34.5 points. Jerry once advised George to always leave on a high note (“that’s the way they do it in Vegas.”) As it turns out though, the entire 2018 season was a high note for the Tigers. In fact, Clemson was the first major college football program to finish with a 15-0 since Penn in 1897. That’s over 120 years. Moreover, the Tigers exposed the Crimson Tide 44-16 in the National Championship Game. Clem entered that game as five-point underdogs, mind you.

And speaking of leaving on a high note, former GT head coach. Paul Johnson. Johnson decided to call it quits after a lackluster 5-6 (4-4 in ACC play) 2018 season. The Jackets did return to the postseason after a one year absence. So that’s good. Then again, they lost the Quick Lane Bowl 10-34 to Minnesota as 5.5-point chalk. So that’s bad.

New head coach Geoff Collins may sound familiar to you as a former Florida and Mississippi State defense coordinator. Additionally, his two-year stint as Temple head coach (2017-2018) does suggest he likes to lean toward defense. Good so far. The Jackets’ defensive could use a shot in the arm. According to top betting sites, the over was 4-2 in GT’s last six games. And it wasn’t because of their punishing offense. If you know what I mean and I think you do. And that’s wherein the problem lies. Georgia Tech’s offense is not what you’d call scorching hot. As a matter of fact, it’s pretty uneven. The Jackets do need to improve their offense. But then, they need to improve all across the board. And ESPN, for one, is not counting on that improvement. On the contrary, the network’s FPI projects GT to win fewer than four games in 2019.

The Tigers were straight-up unstoppable last season. But how reliable were they against the spread? Pretty dependable, I’d say. Per top betting sites, Clemson 9-3 ATS following a 0-3 ATS start. Furthermore, Clem covered in eight of their last 10 games. The Tigers were very successful indeed. And so were you if you put your money on them. Starting QB Trevor Lawrence, who played all 15 games and started 11, is to be credited with much of that success. Not all, but very, very much of it. The ACC Rookie and Offensive Rookie of the Year passed for 30 TDs on 3280 yards.

Now remember I said he was responsible for much but not all of Clem’s success. Neither he nor the Tigers as a whole would have been as successful without their offensive line. Clelin Ferrel, Christian Wilkins, and Dexter Lawrence all deserved to be picked in the first round of the 2019 draft. And Trayvon Mullen and Austin Bryant will also be worthy additions to their new teams.

Our Expert Pick for Georgia Tech Yellowjackets vs. Clemson Tigers

Did you ever wonder how good Lawrence, and running back Travis Etienne, would be without Clemson’s dreaded O-line? If you did, you may have to remain in blissful ignorance. At least according to 247 sports.com. “Clemson has depth, experience, and talent along the offensive line this season. There aren’t many concerns or questions marks entering August,” Anna Hickey writes. If that proves to be the case in practice and not just in theory, then take Clem and the points.