First Round of the NHL Playoffs Predictions 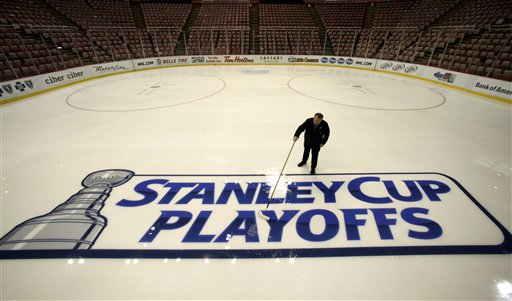 NHL Hockey reaches its final week and the drama is as alive as ever, as nothing is as of yet defined. Sportsbooks reviews had made their predictions for the upcoming Playoffs, but as we come down to the wire, the final spots are yet to be determined. We are down to the most crucial time in the regular season as the chase for the Stanley cup intensifies. Today we predict the first round of the 2016 Playoffs and provide you with our expert betting advise for when the series start.

The main story right now is just who will make it to the final spots in the Eastern Conference. After a ridiculously close race the Boston Bruins were in danger of being left out, however their most recent win after the Red Wings (who are also in the race), left them with some breathing room for the final stretch. The Red Wings would be sweating heavily due to this loss, but so luck would have it for them, the Philadelphia Flyers lost to the already eliminated Toronto Maple Leafs seriously damaging the Flyers’ playoff aspirations. The Bruins and the Red Wings depend on themselves to cement their post-season spots, sportsbooks reviews don’t expect for any major changes, and our expert betting advice here would be to not bet the Flyers making the playoffs.

In the Western Conference they 8 teams that are already set, but the order in which the playoff is going to be set is not as of yet decided. Frankly, there is not real reason to believe that the current standing will see that much change from here in the final games. And the matchups will likely remain the same, unless something completely unexpected happens in the next coming days. Major sportsbooks reviews and hockey analysts all seem to agree that the standings in the Western Conference will stay the same.

The match ups for the 2016 Stanley Cup playoffs will look like this:

The regular season series between both teams have the Capitals winning all three games. The Bruins could keep some momentum after their playoff push, but the Capital don’t seem to be making an early exit. They are bound to reach the Stanley Cup Finals.

Penguins enter strong on this series; they are the clear cut favorites, although the Islanders have beat them in the regular season already.

The Rangers push to win the Stanley cup once again starts with a series against the Panthers. Sportsbooks reviews see them as favorites, although not making it past the second round.

The Lightning will move on. The Red Wings have lost some steam in their last games, we don’t see them moving on.

As much of a mismatch this might be, the Wild was able to pull out a win over the Stars, they might make them sweat for it. But Stars will go over easily.

Such an evenly matched series. Sportsbook reviews consider that Chicago has a real chance of knocking out the Blues.

The Kings might just be the dark horse to really put on a deep playoff run.

The Ducks have dominated all season long this particular matchup, but the Sharks could get the best of them in a playoff scenario. Sportsbooks reviews don’t have them as a lock, but the Sharks might be a good upset.