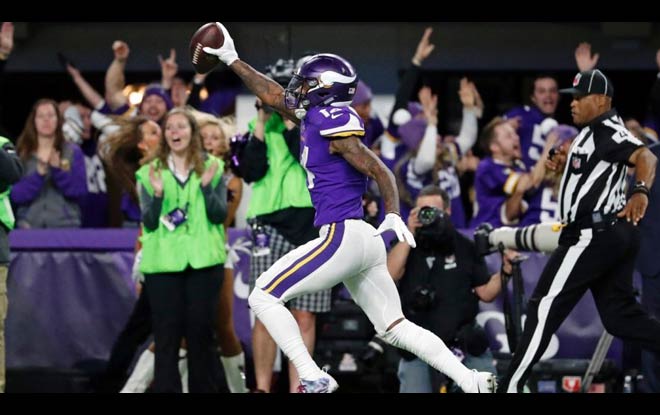 Betting sites favor the home team by four points when two of the most underwhelming teams in the league meet up in Week 6 with the Atlanta Falcons facing the Minnesota Vikings. The 1-4 Vikes are fresh off a well-deserved 27-26 loss to the Seahawks. Nonetheless, the best online sportsbooks have them as home favorites versus the winless Falcons on Sunday.

The Falcons are the road dogs at betting sites. Atlanta has yet again started the season very slowly under now-former head coach Dan Quinn. Following a 23-16 loss to the Panthers on Sunday, they are now 6-20 ATS in Weeks 1-7 since 2017.

This resulted in Atlanta dismissing Quinn as well GM Thomas Dimitroff after the latest loss. They named Raheem Morris the interim head coach. Morris takes over a squad that ranks second-last in total defense (allowing 446 yards per game) and scoring defense (32.2 points per game).

Their offense, despite being a fast-playing unit, has been in the bottom half of the league, ranking 21st in scoring (24.4 ppg) and 20th in yards per play. The Falcons are also struggling with uncertainty behind the scenes. Owner Arthur Blank is non-committal about the future of long-time QB and one-time NFL MVP Matt Ryan.

The Atlanta Falcons need a win to prevent a ghastly 0-6 start to the season. The Atlanta Falcons have split their last eight on the road. Matt Ryan is completing 63.2% of his passes for 1,472 yards, seven TDs and three picks. Ryan has one touchdown pass in his last three games.

The Vikes are the home faves on betting sites’ oddsboards. They have just one win, but they’ve been very competitive in each of their last three games. They defeated the Texans and lost by one point to the Seahawks and Titans on last-minute scores. Minnesota may opt to sideline Dalvin Cook this week. He has an adductor strain and Minnesota has a bye next week.

The Minnesota Vikings need a win as well to rebound from a 1-4 start to the season. The Minnesota Vikings have lost four straight at home. Kirk Cousins is completing 64% of his passes for 1,132 yards, eight TDs and seven picks. Cousins has one or fewer touchdown passes in five of his last eight games.

The Falcons are like a headless chicken running around aimlessly. The Vikings crapped the bed on Sunday against the Seahawks. Atlanta may be without a head coach, but that’s better than a coach that gives away surefire wins on account of stupidly childish decisions. Both of these teams suck big time and you shouldn’t waste time or money on them.

That leaves us with the total. Both offenses struggle converting on third down. Minnesota is 24th in third-down conversion rate and the Falcons 23rd. Add a run-heavy Vikings offense that plays at the fifth-slowest pace in the NFL and you have a total that seems a little too high at 54 points.