Falcons Favorites at Legal Betting Sites against Giants in MNF 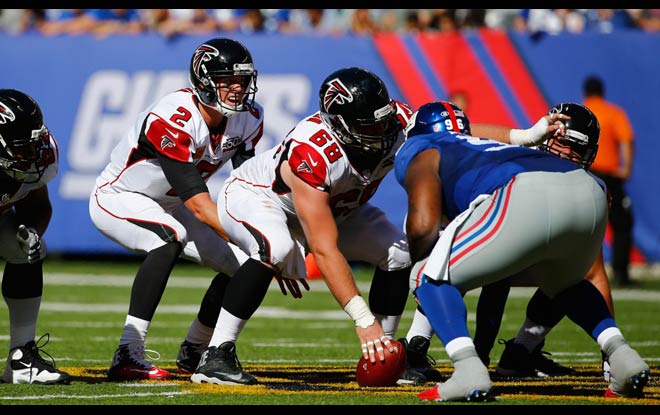 The Atlanta Falcons are, per the top legal betting sites, four-point home faves in the Letdown Bowl. The best online sportsbooks may not see either team in the Super Bowl. However, they surely are in the conversation for most disappointing team this year. The Falcons just snapped a three-game losing streak, beating the Bucs 34-29 on Sunday. But they’ve been so bad Eli Manning believes the Giants can end their own three-game skid in the Lost City of Atlanta.

“It’s easy to get hot in this league, it’s possible. We just got to find a way to get one. This week on the road, a tough contest against Atlanta, but I think the guys are ready, and focused, and ready to go out there and ready to play better football,” Brother Eli said. Manning may have extra motivation. Winning games would put the G-Men away from the top pick in the 2019 draft. In other words, his replacement.

Rookie running back Saquon Barkley has a minimum one TD in four out of five games this season. Which would make him the bizarro Odell Beckham Jr. Speaking of OBJ, Giants owner John Mara said of him that “he needs to do a little more playing and a little less talking.” Which led to Odell’s daddy throwing a hissy fit on Instagram. Odell Sr. should start a club with Lavar Ball.

With running back Devonta Freeman out for the time being, the Falcons have devoted extra attention to the ground attack. I guess they’ve completely given up on the defense. According to top betting sites trends, Atlanta is 11-4 ATS in their last 15 prime-time games.