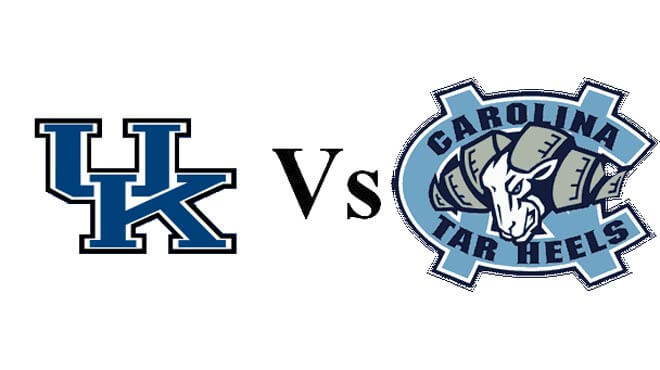 Now that we’ve made it this far into the NCAA Tournament, there are plenty of  best sportsbook storylines worth keeping an eye out for; the SEC being the most represented conference in the later rounds, the lack of buzzer-beaters we’ve witnessed, and even the Gamecocks stunning Baylor in the Sweet Sixteen Round.

But even amongst these innumerable headlines, the juiciest story ahead of the Elite Eight weekend revolves around the rematch between Kentucky and North Carolina, who faced each other earlier this season. Kentucky came out on top the first time these two met, thanks to a 47-point performance from Malik Monk. But Theo Pinson was out for that contest, and since he’ll likely be tasked with covering Monk; will the Wildcats struggle to repeat their performance.

The Tar Heels come into Sunday afternoon’s matchup flashing a 30-7 record (14-4 ACC) that paved the way for a 1st place finish in conference standings. In the ACC Tournament, UNC advanced to the semifinals, where the Blue Devils sent them home 83-93.

The Wildcats may be UNC’s toughest test yet, but the Tar Heels have not had an easy road to the Elite Eight. In the opening round of the tournament, North Carolina faced Texas Southern and overcame the Tigers 103-64. In the second round, the Tar Heels beat Arkansas 72-65, before advancing to Sweet Sixteen and beating out Butler 92-80.

To help keep the program alive in this year’s March Madness tournament, the best sportsbooks favorites will turn to leading point-scorer Justin Jackson. Jackson is averaging 18.2 points, 4.7 rebounds, and 2.8 assists per outing. Second in points for UNC is Joel Berry III who is netting the program 14.7 points, 3.1 rebounds, and 3.6 assists per contest.

Like the Tar Heels, Kentucky also enjoyed a 1st place finish within their respective conference, thanks to the 32-5 (16-2 SEC) record the Wildcats turned in this season. However, Kentucky enjoyed more success than UNC in their conference tournament, as the Wildcats were able to advance to the championship game, where they usurped Arkansas 82-65.

To kick things off in this year’s tournament, the Wildcats faced off against Northern Kentucky, and swiftly handed the Norse a 79-70 loss, before advancing to the Second Round and beating Wichita State 65-62. The Wildcats nearly lost to the Shockers, but they fared much better against UCLA, beating the Bruins 86-75. Kentucky’s track record proves that they’re capable of rising to the occasion and they’ll certainly need that against UNC.

The best sportsbooks underdogs will turn to Malik Monk to once again lead them past the Tar Heels. Monk is currently averaging 20.1 points, 2.5 rebounds, and 2.4 assists per matchup. Second in points for the Wildcats is De’Aaron Fox who is putting up 16.8 points, 4.0 rebounds, and 4.6 assists per outing.