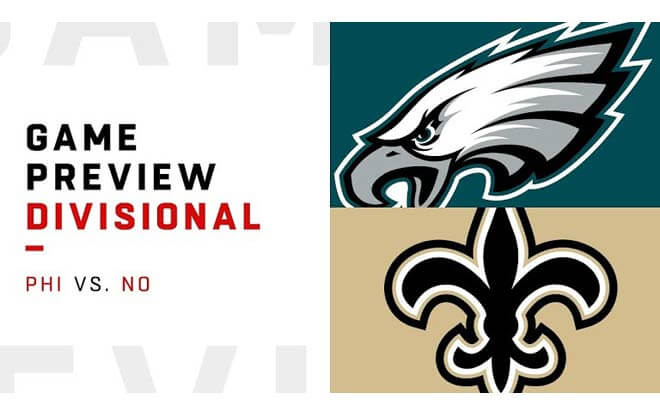 The offshore sportsbooks favor the New Orleans Saints by eight points over the Philadelphia Eagles. The Holy Ones won their first back-to-back NFC South titles with a win over Tampa Bay in Week 14. Two weeks later New Orleans secured home field advantage throughout the playoffs with a win over the Pittsburgh Steelers. The Eagles upset the Chicago Bears 16-15 to advance to the divisional round. However, Philly couldn’t cover the 6.5-point spread established by the best online sportsbooks.

“I think we’re a different football team now than we were [when the Saints blew out the Eagles earlier this season],” Philly head coach Doug Pedersen said. “And we’ve just got to put a good plan together in all three phases. Go back down there, we’re on the road, it’s going to be in a dome, it’s going to be loud again, all those things, and it’s going to be a great atmosphere.” Funny thing he should say they’re a different team. ‘Cause here we are again, Wentz out, Foles in, and the Eagles soaring. I guess the more things change the more they stay the same.

So-called backup QB Nick Foles had two TDs and two picks on 266 yards against the Bears. Not mind-blowing numbers. Still, Foles delivered the goods with a late, late game TD pass to Golden ‘Little Man Tate.’ Down by one, Chicago kicker Cody Parkey missed a 43-yard field goal. And there was much rejoicing in Philly. Per the offshore sportsbooks, the Eagles are 4-0 ATS in their last four playoff games. And 5-2 ATS in their last seven road games. As well as 1-4 SU and ATS in their last five games playing the Saints.

The Saints 14-2 SU in their last 16 home games. They also are 5-0 SU in home playoff games with Sean Payton as head coach. To quote Cornell Ira Haynes, Jr., “Hey, must be the money.” Apparently, Payton showed his players, “a glass case full of cash, along with a Lombardi Trophy. Additionally, “three armed guards” carried in more cash, to show the Saints a total of $225,000. The goal of that number? To show his players how much they would earn if the Saints won the Super Bowl.” And to quote Nino Brown, “money talks and bullshit runs a marathon.”

Our Game Prediction: It could be argued that the Eagles didn’t beat the Bears. Da Bears beat da Bears. If it weren’t for a few inches, New Orleans would be hosting Chicago instead of Philly. This one, though, is not likely to come down to inches. Brees and the Saints are packing way to much heat for Foles and the Eagles to keep up with them. Unless Nick pulls off a miracle, that is. And we all know that’s Breesus’ area of expertise. Take NOLA to cover the spread set by the best online betting sites.