Duke vs. Virginia Tech Spread and Predictions for Sweet 16 Betting 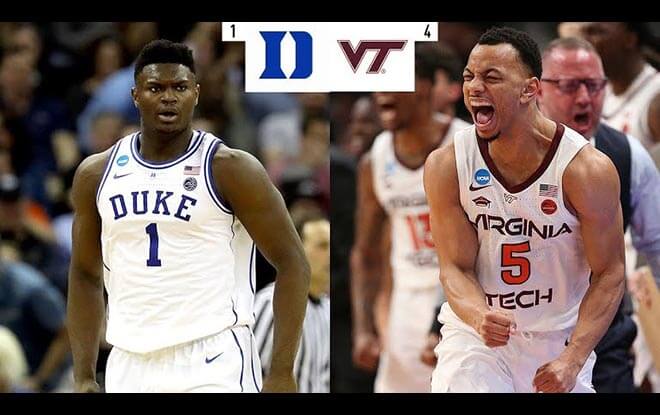 Legal sports betting sites odds favor the Duke Blue Devils over the Virginia Tech Hokies by seven points. Duke beat North Dakota State 85-62 in the first round and barely held off Central Florida 77-76 in the second. According to the best online sportsbooks, the Blue Devils entered the former game as 27.5-point favorites. And the latter as 13-point chalk. For the mathematically-impaired, that means Duke failed to cover on both occasions. Especially the second one.

VTech overcame the St. Louis Billikens 66-52 in the first round and snuffed out the Liberty Flames 67-58 in the second. The Hokies were 10-point faves in the first game and 9.5-point chalk in the second. Which means they are 1-1 ATS in the NCAA tournament. Virginia has already won and covered against Duke this season, 77-72 on February 26th. However, barring another shoe-related mishap, ‘Iron Lion’ Zion Williamson will unleash himself on the Hokies this time around.

The Blue Devils have lost just two games this season with Williamson in the lineup. And three more without him. One of which was the aforementioned regular season game versus the Hokies. Williamson has scored a total of 57 points in two NCAA tournament games. And unless some sneaker sabotage takes place, there’s no indication he’s about to slow down. Williamson also hit four treys in the past two games, an area where Duke leaves a little to be desired. The Blue Devils shoot just 30.7% from the three-point line (34.5% in the last three games). But they make up for that by holding opponents to 29.8 three-point shooting percentage. That will serve then well defending Tech’s 39.5% three-point shooting.

According to legal online sports betting trends, the Devils are 1-5-1 ATS in their last seven games overall. And 0-4 ATS in their last four NCAA tournament contests. The under is 9-3 in Duke’s last 12 games playing a school with a winning record.

I think I already drove the point to the ground, but VTech defeated Duke late last year. There are a few caveats, though. In addition to Williamson’s absence, the Hokies had home court advantage. However, Virginia Tech ain’t sweating Zion. “You can’t really run from names,” guard Nickeil Alexander-Walker said. “We know they’re a great team. But that’s why you come to the highest level. That’s why I committed to playing in the ACC. I knew I was going to have to play Duke, but it was just kind of wanting that. “Now there’s no excuses. We could’ve had an excuse if we lost. They could’ve had an excuse. So now, let’s just have fun and see what happens and compete and enjoy the moment.”

Pick: Duke came way too close to elimination against the UCF Knights. Even with Williamson in full force (‘Mount’ Zion scored 32 points). But then Central Florida had an equalizer in seven-footer Tacko ‘Down’ Fall. Which is something that Virginia Tech sorely lacks. Methinks the Blue Devils are not going to risk another close call. And the Hokies are going to suffer the consequences. That is to say, take Duke to cover the legal online sports betting point spread.