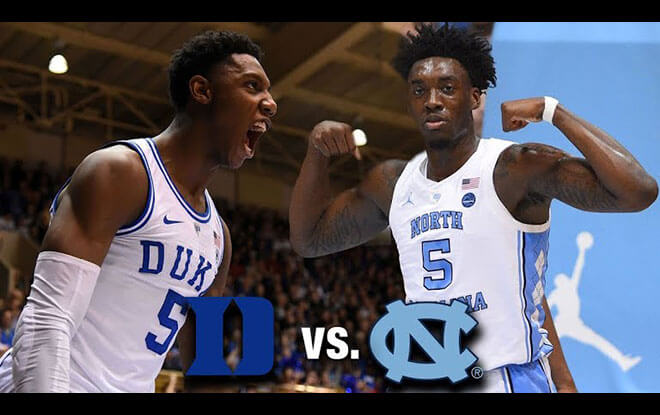 According to top betting sites, the Duke Blue Devils were 10-point home faves when they last faced the NC Tar Heels. As we in the biz know fully well, even the best online sportsbooks can err from time to time. North Carolina upset Duke 88-72 at Cameron Indoor Stadium in Durham on February 20th. Of course, no way could oddsmakers have foreseen Duke losing ‘Iron Lion’ Zion Williamson 30 seconds into the game. As it turned out, Williamson didn’t have so much feet of clay as he did Nike shoe-clad feet. But not only people who bet on the Blue Devils covering the spread took a hit. Nike’s stock dropped $1.1 billion the day after Williamson’s grade 1 knee sprain. I’d understand an overinflated Reebok Pump blowing up on you. However, a Nike PG 2.5 coming apart around your foot? That’s not even fit to be the Little Tramp’s dinner.

“I don’t think [Williamson]’ll be ready for Saturday [vs. UNC],” head coach Mike Krzyzewski said. “I have to be careful not to push this. I’d be surprised if he’s not ready by the ACC tournament.” The Blue Devils have gone, per top betting sites, 3-1 SU and 2-2 ATS since losing Williamson. However, those wins came against Syracuse, Miami, and Wake Forest. The one loss came versus the one ranked team they faced in that span, then-No 20 Virginia Tech. Duke’s offensive has been, in Zion’s absence, relying on RJ Barrett. The Canadian shooting guard has averaged 26.2 points per game in the past five games. Including three 28-plus-point performances. Nonetheless, even his 33 points against North Carolina weren’t enough to keep the Tar Heels at bay.

Williamson’s injury came to the Tar Heels like manna from the heavens. In addition to all the points Zion didn’t score, there were all the points he wouldn’t have allowed. NC outscored Duke 62-28 in the pain, including 32 of their first 34 points. “When he goes down, I’m obviously trying to attack — and I was going to do that anyway,” forward Luke Maye said, referencing Williamson, after scoring 30 points on Duke. “I was going to try to get inside and work inside out and just play my game and play the way I know I can play.” Hey, more power to you. Maye the force be with you, Luke.

North Carolina is 15-2 in conference play this season, which is their best ACC record in the last five years. Guard Kenny Williams likened these Tar Heels to those that reached two Final Fours and one NCAA title in his tenure. “It definitely has a feel of some of those teams,” he said. “Those teams were on a mission, and I think we’re on a mission also. We’ve got hungry young guys and we’ve got hungry vets. I think it meshes so well, because the young guys are taking care of their business on the court. And then we’ve got the experienced guys that can calm us down in tough environments and tough spots in games.”

Pick: According to the News & Observer, Coach K had not ruled out “Williamson playing in Tuesday night’s home finale against Wake Forest.” Although that did not come to fruition, Duke still came away with the victory. By a single solitary point. Thus failing to cover 24.5-point spread with which top betting sites had favored them. And North Carolina is certainly not Wake Forest. Unless Zion makes a speedier recovery than expected, the Tar Heels will have another field day with the Blue Devils