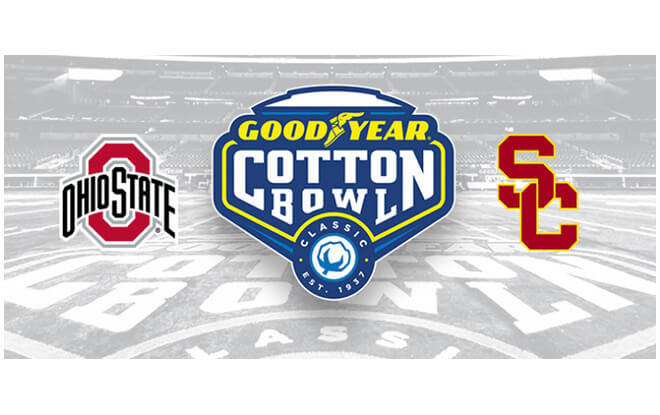 One of the best bowl matchups outside of the College Football Playoffs takes place on Friday, December 29, as the No. 8 USC Trojans take on the No. 5 Ohio State Buckeyes in the Cotton Bowl on ESPN. Both teams come into this game at 11-2 and disappointed that they didn’t make the College Football Playoffs. The Trojans are not getting much respect, as they are 7.5-point underdogs at the sports betting website. Let’s look at the matchup and Cotton Bowl picks.

The Trojans and Buckeyes were hoping for more, so according to sportsbook reviews sites, this game could be decided by which team is motivated. This will be the 48th bowl game for the Buckeyes and the first time they will be playing the Cotton Bowl since 1987. USC and Ohio State have met seven times in their history, with USC winning four of the seven. Ohio State is 22-25 all-time in bowl games. Head coach Urban Meyer is 10-3 in bowl games.

The Buckeyes rank in the top 10 in both total offense and total defense. The Buckeyes are led on offense by quarterback J.T. Barrett who isn’t always pretty but usually finds a way to win. He threw for 2,939 yards with 35 TDs this season. He ran for 732 yards with 10 scores.

On the other side of the ball it is USC QB Sam Darnold leading the way. One of the top picks in the upcoming NFL Draft, Darnold will be trying to avoid Ohio State DE Nick Bosa who led the Buckeyes with six sacks. Darnold is 20-3 as a starter. He threw for 3,787 yards passing and 26 TDs.

Many sportsbook reviews sites think this game could be decided up front as the Buckeyes have a great offensive line led by Rimington Award winner Billy Price, while the Trojans led the country in sacks with 43 and they led the country in takeaways with 24.

The Buckeyes will have to put the sting of not making the College Football Playoff behind them if they are to win this game. “They’re probably devastated,” Meyer said of his players. “But that’s one thing families do. How do you handle devastation? Get around those you love and let’s go back to work.” USC is definitely motivated, as they get to play Ohio State. “It’s extremely special for our team as well as our fan base,” USC coach Clay Helton said. “This is a classic matchup between two legendary programs.”

The odds on this game at sportsbook reviews sites seem really high on an Ohio State team that might not be motivated. We’ll take the points with USC in this contest and also play the game over the total.