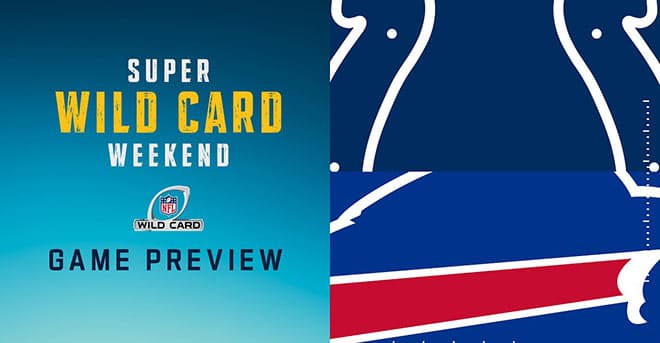 NFL gambling sites favor the home team by seven points when the Indianapolis Colts and the Buffalo Bills play on Saturday in NFL Playoffs action from Ralph Wilson Stadium. Playoff football comes back to Orchard Park for the first time in a quarter of a century. Buffalo (13-3 SU, 11-5 ATS) hosts Indy (11-5, 8-8). The Bills have won their past nine playoff games as home faves. They opened as 7-point chalk, according to the best online sportsbooks, to get their first postseason win since 1995.

The Colts are road dogs at NFL gambling sites. The Colts have been quick starters all season. They rank second in the league with an average of 10.3 points in the first quarter. That tendency continued last week. Indianapolis got off to a 10-0 lead over Jacksonville in the opening quarter.

They then improved that lead to 20-0 late in the first half. The Colts have scored 20 points or more in the first half in four of their past five games. They have carried a lead into halftime in all of those contests.

What’s concerning for Colts fans is how Indy has had issues finishing games. A week after squandering a 17-point lead in a loss to the Steelers. The Colts let Jacksonville close within 20-14 before finally finishing with a 45-yard touchdown run by Jonathan Taylor with 3:35 remaining in regulation.

Taylor had a franchise-best 253 yards. He enters the playoffs averaging almost 125 rushing yards per game in his last six. Taylor keeping this up could be key in what will surely be freezing conditions in Buffalo. Especially considering starting QB Philip Rivers has not passed for more than 300 yards in seven games in a row. Indianapolis hasn’t been very successful over the years in January outside the warmth of Lucas Oil Stadium. They are 2-7 SU and ATS in the last nine.

The Bills are home favorites per NFL gambling sites. Buffalo is red hot going into the playoffs. They have won their last six games by an average of 19.8 points. Josh Allen has tossed 15 touchdown passes in his last five games.
The Bills have covered eight in a row and would be on a 10-game winning streak if it weren’t for an improbable Hail Mary loss on November 15 in Arizona. The Bills could be missing a big offensive piece on Saturday.

Slot receiver Cole Beasley may be out with a knee injury that took him out of last week’s game against Miami. Beasley was en route for over 1,000 yards prior to the injury. That would have been a career-best in receptions this season.

Buffalo did just fine sans Beasley against the Dolphins. They racked up a season-best 56 points to secure the No. 2 seed in the AFC. Isaiah McKenzie, in place of Beasley, caught six passes for 65 yards and two first-half TDs. He added an 84-yard punt return score in the first 30 minutes. Stefon Diggs contributed 76 receiving yards to end the year with a league-high 1,535. Gabriel Davis had two recs for 107 yards. John Brown came back from an injury to add 72 yards and a touchdown.

Let’s go with Buffalo on this one. The Bills are on a nice streak over their past six games. They have left their mark on the AFC East this year. Buffalo has scored 38 or more points in each of their past three games. Indy has posted some great offensive numbers and points totals in the last couple of months. The momentum Buffalo has built heading into this game, though, is going to be hard to stop.