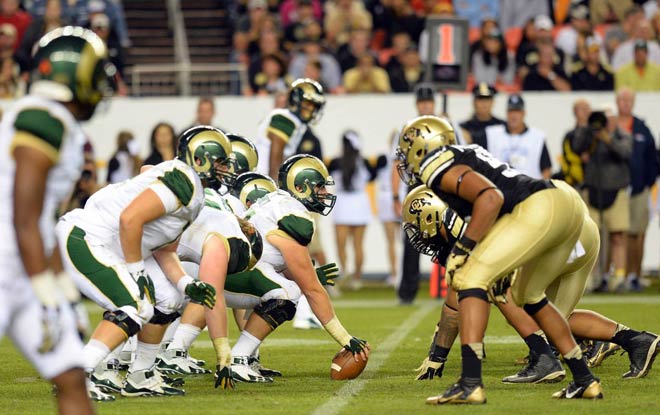 The best offshore gambling sites have the Colorado Buffaloes as a 6.5-point road dog against the Colorado State Rams. Members of the media also have no love for the Buffs. CU was picked to finish 5th out of six schools in the Pac 12 South Division. Colorado only received one first-place vote. Also known as a pity vote. But the Buffs remain optimistic. “I’m excited,” QB Steven Montez said. “I think we have a really good team; really good offense, a really good defense, as well. We’re going to look good. We need to put it all together in fall camp so we have it ready to take into the season.” Then again, it’s easy to be optimistic when you’re 0-0.

The Rams, on the other hand, are a tad more realistic. “As long as our win total isn’t seven this year, I’ll be happy – but let’s go for more than seven,” running back Izzy Matthews said. “A nine-win season for us – I don’t want to say it’s not going to be hard – but it’s not outlandish. Our goal is to go out there and win 12 games. If we won 12 games, I wouldn’t be surprised.”

If you’re going to screw up, it’s best to do so in practice than in an actual game. The Buffs better hope it’s not the other way around for Montez. “Steven in the past has struggled in scrimmages, so it was exciting to see him come out and operate at a high level,” co-offensive coordinator Darrin Chiaverini said following the team’s final open scrimmage. “He operated quickly, he got the ball out and made good decisions and he avoided mistakes.” Head coach Mike MacIntyre thought “the offense made some big plays.” The defense, on the other hand, needed some tinkering. Like moving Drew Lewis from inside to outside linebacker. “[Lewis] has a lot of ability and we’re working with him to try to get him to where he needs to be,” defensive coordinator DJ Eliot said. “He has great speed and great hips and those are two of the most important things in a great pass rusher.”

Speaking of defenses, Colorado State’s “didn’t give up a point, which was awesome to see,” head coach Mike Bobo said after the Rams’ own. “I thought they made plays even when they were in the red zone and situations where they had to make plays.” That’s the silver lining. The cloud is that QB K.J. Carta-Samuels went 10 of his 22 throws for 123 yards and an interception, but no TDs. Nonetheless, Bobo thought he “did well. I thought he was going to the right spots, missed a few here and there, but was moving well.” That’s what I meant when I said that it’s better to have an off day during practice than in a real game.

Our Prediction:
Let’s go with the majority and say Colorado State, why don’t we?