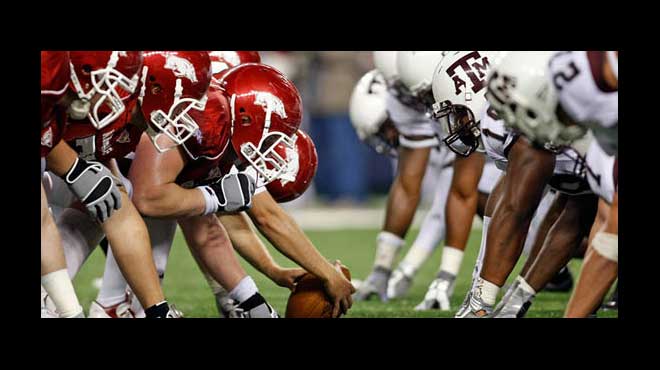 Top 20 teams match up on Saturday on ESPN as 17th-ranked Arkansas plays 10th-ranked Texas A&M at AT&T Stadium in Arlington, Texas. Both teams come into this game unbeaten so this is a key game in the SEC West division. It could be a high scoring game as the Razorbacks are averaging nearly 35 points per contest while the Aggies are scoring over 42 per game. The Aggies are laying 6.5 points at home in this contest. Let’s look at the game and college football predictions.

The Razorbacks have been getting excellent play from Allen who was the SEC Player of the Week after throwing for 233 yards and three TDs in the Week 2 win over TCU. He didn’t have to do much last week in a 42-3 rout of Texas State but he still threw for 241 yards and two touchdowns. He has completed 67.1% of his passes this season and has 7 TDs and two interceptions.

“Austin does a lot of things very well,” head coach Bret Bielema said. “I think he throws on the move very well, and he throws well to the left and to the right which you’ve seen a little glimpse of. He can run the football, but I wouldn’t say we want to make a heavy dose of it. That jump cut he gave to his left wasn’t quite as good as our running backs, but it sufficed. I’m just excited to watch him continue to grow.”

Trevor Knight is a graduate transfer from Oklahoma and he is now leading the Aggies. Knight has thrown for 830 yards and five touchdowns this season. Knight has also run for 151 yards in the three games on 28 carries.
“I think he’s a deceptive big man with speed,” Bielema said. “He’s got good size. They list him at 6-foot-1 and 215. To me he looks a lot taller than that, and moves.”

I will take the points with the Razorbacks in this contest.