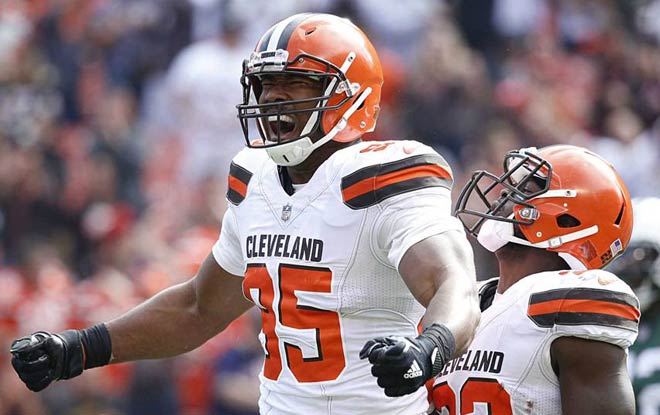 At this point, gambling sites for NFL don’t give the Cleveland Browns really long odds. They give Hue Jackson really long odds. There is a lot of talk about the “new look” Browns. And they do indeed look better than they have in a long while. It’s all, of course, relative. Like in The Princess Bride. When they thought Cary Elwes was dead, but he was only mostly dead. Anyway. As long a Hue rears his ugly mug on the sidelines, the Browns are pretty much screwed.

That’s the difference between soccer and football. In the former, people who crap the bed get death threats. Hue leads the Browns to 1-15 and 0-16 seasons, and he can still show his face in Cleveland without those fake nose and glasses. Which is actually a good difference, I guess. Kind of like Eric Idle said in The Meaning of Life. “At home they’d hang me — here they’ll give me a (expletive deleted) medal, sir!”

Odds set by Intertops sportsbook, a master among gambling sites for NFL.

The good news is that the Browns simply cannot do worse than last season. They still can, mind you, do as bad. But not, you know, worse. That’s literally impossible (according to win totals at gambling sites for NFL, they will do better). And with the first pick in the first round of the draft, QB Baker Mayfield, there’s a pretty good chance they’ll do better. Ditto for running back Carlos Hyde, formerly of the 49ers. Hyde is coming off his best season, touchdown-wise, with eight rushing scores. The Browns also acquired wide receiver Jarvis Landry, QB Tyrod Taylor, and cornerback Damarius Randall, among other new arrivals.

At New Orleans Saints. The Browns are 6-2 in New Orleans, including winning the last three straight. However, their last visit was in 2010.

At Oakland Raiders. Cleveland have won three of their last five games in Oakland, the last of which occurred in 2012.

At Tampa Bay Buccaneers. The Browns have played very sparingly in Tampa; just five times between 1976 and 2010. They won the first three and lost the last two.

At Pittsburgh Steelers. Cleveland last won in Pittsburgh in 2003. They have lost the following 14 trips.

At Cincinnati Bengals. The Browns have won just two games in Cinci in the last 10 years.

At Houston Texans. Cleveland won their first game in Houston in 2005, but lost the next four.

At Denver Broncos. The Browns have lost their five straight to the Broncos in Denver.

At Baltimore Ravens. Cleveland have won just twice in Baltimore in the past 11 years. Both wins were in OT, in 2007 and 2015.