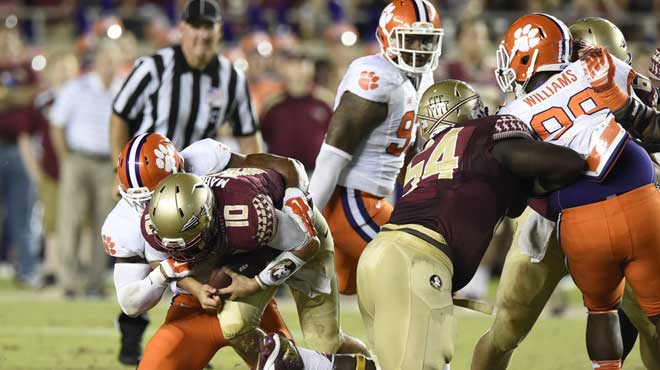 The unbeaten Clemson Tigers visit the Florida State Seminoles in a matchup of Top 12 teams on Saturday on ABC. The Tigers are ranked 3rd in the country while the Seminoles are ranked 12th. The Tigers are primed to make the College Football Playoff and finish the season unbeaten but they have one more roadblock in their way as they visit the Seminoles in Tallahassee. Let’s look at the contest and free college football picks.

This game is critical to Clemson as they look to make the College Football Playoff but it is not a key one in the ACC Atlantic division race as Clemson likely has that locked up while the Seminoles are out of contention. That doesn’t mean this game is not important to Florida State as they are still looking to win 10 games for the fifth straight season and they would love to knock Clemson from the ranks of the unbeaten.

“There are still a lot of matchups left to play,” head coach Jimbo Fisher said, “It could happen. … It shows every week you have to be ready to play.”

The Tigers have lost eight fumbles and thrown eight interceptions this season so they could have trouble if they turn the ball over on Saturday against FSU.

Clemson has had a lot of trouble on the road in this series losing 11 of the last 12 in Tallahassee.

Who do you trust? Do you trust the Tigers laying points on the road or do you trust Florida State’s defense to stop the Tigers? I will avoid a side and just take the game over the total at the best online sportsbook.