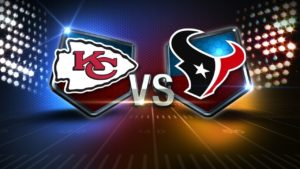 Kansas City reaches the NFL playoffs with a hot streak that has put them as favorites on almost al Sports betting sites. Despite being on the road visiting the Houston Texans, line makers of US Friendly Sportsbooks have penciled the Chiefs as the -3.5 favorites. On paper, they appear to be the sure bet for this instances and with good reason. They are currently, perhaps, the hottest team in the NFL, they enter the playoffs with fantastic momentum and a win this Saturday versus the Texans could cement them as a team to consider for these playoffs. However, they first have to deal with the Texans first… and a little fact that the Chiefs have not won a single playoff game in over two decades.

Houston also reaches the playoffs with a red-hot status. They started the season horribly, but managed to pull themselves together and regain their way. Slowly but surely, the Texans steered the ship into playoff territories, thanks to a very effective and dominant defensive play. Also offensively, the Texans have been efficient on offense. They might not be the most powerful offense but they are able to subdue teams defensively and provide chances for Brian Hoyer and Co. enough opportunities to put numbers on the board.

The Texans being the underdogs on all sports betting sites, and playing at home could be a dangerous team. While people might underestimate them, they forget that the Texans, with that defense and at home, they are not a easy team to beat. Also, let’s not forget that the Chiefs winning streak only had victories against two teams with winning records: the Steelers without Roethlisberger, and the Broncos with a poor performance by Manning. Also let’s not forget that the Texans know how to win playoff games, unlike the Chiefs who have not won a playoff game since 1994.

The Kansas City Chiefs have built a team that is strong on both ends of the ball, that caught fire at the end of the season. They have an excellent chance of making an impact this year, but the true issue here is that some pundits on top online sports books and sport betting sites, consider that they have not yet been truly tested. The playoffs and the Texans will provide a real challenge for them.

We are going on a limb here, but we predict that the Chief’s streak ends this Saturday. It will be an upset and a heartbreaking one for KC. They will find themselves overpowered by Houston’s defense and in the end the game will barely cover the spread. The Texans will win 28-24.