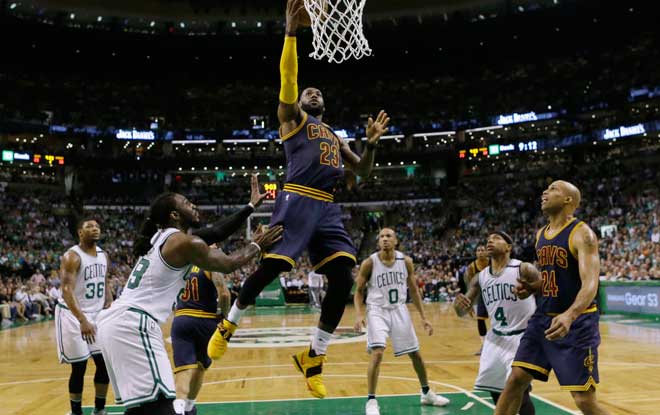 After the Boston Celtics sealed the deal against the Philadelphia 76ers, the Kyrie Irving-less Celtics are now ready to face the Cleveland Cavaliers in the Eastern Conference Finals. While certain sports gambling websites believe that Boston can challenge the Cavs in a best of 7 series, it’s hard to imagine them doing so considering the awe-invoking run the Cavs are currently on. Let’s take a look at some good sportsbook betting options for Game 1 of this postseason series.

The Cavs come into this Game 1 matchup with all the confidence in the world after sweeping the Toronto Raptors. Not only did Cleveland sweep the No. 1 seed in the East, they did so in a series in which they were pegged as the underdog in all but one game. What was most surprising was the fact that LeBron James got some help from his teammates throughout the series. But notwithstanding that help, James still delivered one of the most breathtaking performances in postseason series. We saw King James do everything from nailing last-second buzzer beaters to win the game, to putting up more than 40 point performances. It would’ve been thrilling to see James go up against Irving in the Eastern Conference Finals, but we’ll have to settle for this Cavs vs. Celtics contest.

The Celtics have already proven plenty this postseason, considering they’re competing for a shot at the NBA finals without two of their most important starters. Clearly, judging by the odds Boston is facing on the money line, NBA sportsbooks have taken notice. And since Boston finished higher in conference rankings during the regular season, they’ll get home field advantage through most of this series. We’ll have to see if that’s enough to knock out the Cavs.

The above listed odds hail from MyBookie sportsbook. MyBookie has built up quite a following during this year’s NBA postseason by offering some of the most eye-catching sportsbook bonuses available on the market. On top of that, their easy to use interface and fast cash out options makes them a fan favorite amongst longtime betting veterans. Feel free to check out our online sportsbook review to get a closer look at what they offer. Likewise, you can hop to their site to begin your enrollment process today.

Best Online Sportsbook Prediction: 102-99 Boston. The Celtics shock the nation by picking up Game 1 of this series at home. The TOTAL will be UNDER for Game 1.

Best Online Sportsbook Pick: Taking either team straight up can be a good sportsbook option since the money line odds are so even. The spread seems like a decent option for either team, depending on how you feel about this matchup. All in all, the TOTALS line is the only line you’ll want to shy away from in this one.