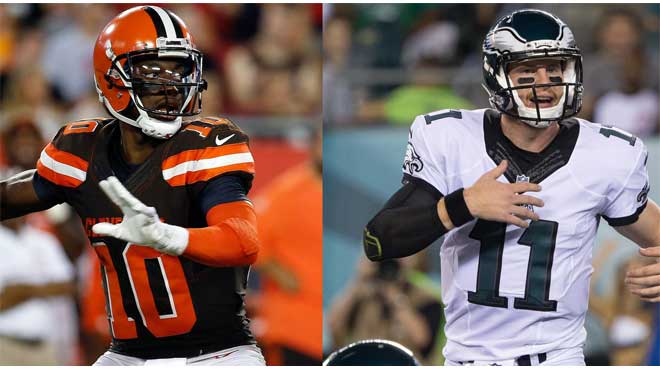 Two teams with new starting quarterbacks will meet in Week 1 as the Cleveland Browns visit the Philadelphia Eagles. The Browns will be going with Robert Griffin III as their quarterback this season while the Eagles will be starting rookie Carson Wentz. The Eagles are listed as 4-point favorites at the best betting websites. Oddsmakers at TopBet Sportsbook think this could be a low scoring contest as the total on the contest is 41 at online sportsbooks.

The Browns enter the 2016 season with a lot of optimism as Robert Griffin III takes over under center. He was great four years ago as a rookie when threw for 3,200 yards and rushed for 815 yards. He had 27 total TDs for the Washington Redskins that season. He then suffered a number of injuries and has never been the same since. He did look good in the preseason and he has some talent around him with Isaiah Crowell in the backfield, Gary Barnidge at tight end and receivers Corey Coleman and Terrelle Pryor. The Browns averaged only 17.4 points per game last season so the only way to go for RGII and the Browns is up.

The Eagles traded away Sam Bradford to Minnesota so they are throwing rookie Carson Wentz into the fire immediately. It was thought that Chase Daniel would get this start but the Eagles have decided to let Wentz sink or swim. Daniel was awful in the preseason so the Eagles will be letting Wentz begin his career as the starter. The Eagles do have Ryan Matthews in the backfield and they have a good receiver in Jordan Matthews.

Neither Cleveland nor Philadelphia is very good on defense so both RGIII and Wentz could have success in their season debuts.

Why are the Eagles laying more than a field goal with a rookie quarterback getting his first start? Wentz barely played in the preseason and now he is expected to play well in a regular season game. I don’t see it. I think the Browns can win this game outright so I will take Cleveland plus the points at the best online betting sites.