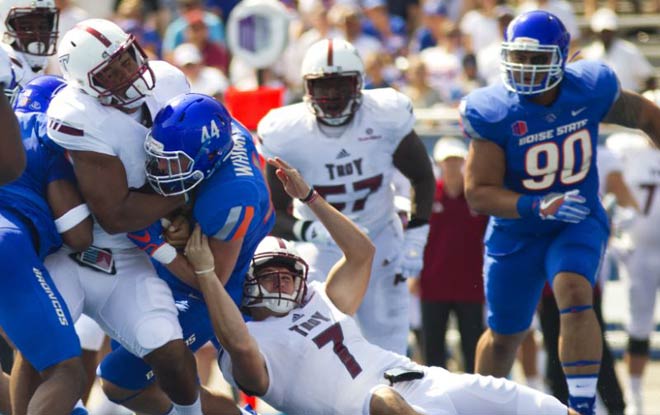 Online sportsbooks favor the Boise State Broncos by 10.5 points against the Troy Trojans. However, unlike their historic namesakes, these Trojans are not unaccustomed to upsetting bigger and theoretically better colleges. For example, Troy beat LSU last season. And managed to cover a 20.5-point spread in the process. “That wasn’t a fluke,” head coach Neal Brown said at the time. “We didn’t run one trick play. We ran zero gimmicks on offense, defense or special teams. We played big boy football. We ran the football, played great defense and were solid on special teams. We earned that victory, and I think that needs to be noted. We were in control of the game from the first period.” Coach Brown is like a historically revisionist King Priam who, in an alternate timeline, managed to save Troy.

There was a pretty damn good reason not to bet on the Broncos last season. To put it bluntly, they blew their wad too soon. BSU was 93-of-203 on third downs (45.8%). That ranked them No. 9 in the FBS. Unfortunately for the Broncos, they converted only 3 of 17 times (17.6%) on fourth downs. “We bring it up every single day we can,” running backs coach Lee Marks said. “We were really, really bad on fourth down.” Actually, you weren’t just bad. You were worse than bad. As a matter of fact, you were the absolute worst.

“We made some mistakes. It’s not good,” offensive line coach Brad Bedell added. “We needed to rise to the occasion and we failed. … The only way to go is up, I guess. That’s the one thing makes me sick to my stomach, thinking about it. We’ve got to improve on it, and we will.” Of course, we won’t know if they have really improved on that area until after the game with Troy. That is, if the situation even arises.

If coach Neal Brown is King Priam, then he has lost his Hector. QB Brandon Silvers left to try his luck in the NFL. Silvers passed for 10,684 yards and 71 touchdowns as a Trojan. He threw, on average, an interception every 51.9 pass attempts. Additionally, he ranked 15th in the country with one pick every 63.3 pass attempts as a senior last year. Brown is not worried, though. Troy also lost running backs Jordan Chunn and Josh Anderson. On the other hand, wide receivers Deondre Douglas and Damion Willis are returning. As are outside linebackers Tristan Crowder and Kirk Kelley. And linebacker Tron Folsom, safety Cedarius Rookard, defensive back Blace Brown, and defensive back/kick returner/punt returner Marcus Jones. Among others.

FREE Pick: If the Broncos have indeed fixed their fourth down problems, then this is a better team than the BSU that finished 11-3 last season. And without Silvers, the Trojans may not be as good as they were last year. This could easily be a repeat of their meeting last September. On that occasion, Boise State defeated Troy and covered a 10.5-point spread.