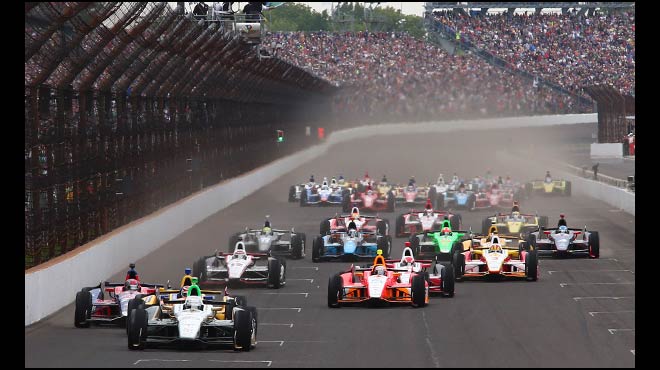 The fighting crossover fever seems to have reached the realm of car racing, as betting websites favour two-time Formula One World Champion Fernando Alonso to win the 2017 Indianapolis 500 – which is the flagship event as well as the sixth race of the 2017 Verizon IndyCar Series season. The Spaniard will be joined by several Indy 500 winners and IndyCar Series champions.

Like Jim Morris and Diamond Dallas Pages in their respective fields, Alonso will be a rookie at the ripe old age of 35. The Asturian will miss the 2017 Monaco Grand Prix in order to become the first active Formula One World Champion to compete in the Indy 500 in decades. Alonso could become the second rookie since 2001 to win Indianapolis 500 after Alexander Rossi won the 100th edition of the race last year.

Dixon won his third Indy 500 pole position with the fastest four-lap average since Arie Luyendyk’s in 1996, as well as the fastest first lap (232.565 mph) since Luyendyk’s track-record 237.498 mph lap in that same year. Dixon had the fastest lap in the Grand Prix of St. Petersburg, led the most laps at the GP of Long Beach, and has not finished worse than fifth place this season, putting him at the top of the driver standings. Dixon won the Indy 500 from the pole position in 2008 and finished fourth in his second pole start in 2015. Dixon is betting websites’ favourite among full-time IndyCar drivers.

The French wheelman has also finished in the top 5 in all his starts this season, and won the Desert Diamond West Valley Phoenix Grand Prix. Pagenaud won the IndyCar Grand Prix last year but his best finish heretofore in the Indianapolis 500 was 8th place in 2013.

Castroneves had the pole position and the fastest lap in Long Beach but that’s the closest he’s been to winning something this season. on the other hand, the Brazilian is one of only nine drivers, and the only active driver, to have won Indianapolis least three times (2001, 2002 and 2009), as well as one of only five drivers and the only active driver to win the Indy 500 back-to-back. Furthermore, he came in second in 2003 and 2014.

Team Penske dusted off the Colombian driver to participate in the Indy Grand Prix – which he finished in 10th place – and the Indy 500, which he won in 2000 and once again 15 years later.

Newgarden has been hit-and-miss this season, finishing 3rd in Long Beach and winning the Grand Prix of Alabama for the second time but barely cracking the top 10 elsewhere. Newgarden had his best Indy 500 finish ever last year, coming in 3rd place. And that’ll do it for this year’s betting websites faves to win the Indianapolis 500.