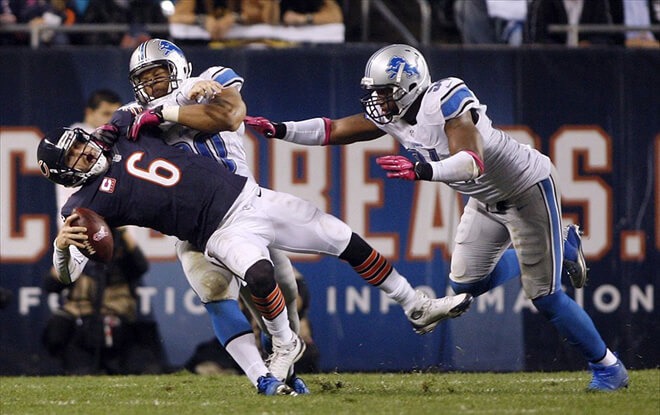 Sites for betting in the NFL favor the Detroit Lions by 3 points over the Chicago Bears in their 2020 NFL regular season opener on September 13 at 1:00 p.m. at Ford Field.

Da bears are the road dogs on this one, as established by sites for betting in the NFL. Head coach Matt Nagy had said on he wouldn’t name a starting QB for the opener in Detroit “before that game.’’ He has backtracked, though, saying on Monday he will make the announcement shortly after he has let Mitchell Trubisky and Nick Foles know. NFL teams must cut down to 53-man practice squads and 16-player practice squads come next Monday. The league is expecting teams to publish their depth charts on the same day. It seems likely that Nagy will name his starting QB for the Lions games the same day. “There will be no waiting until the middle of [next] week or the end of the week for that to happen,’’ Nagy said. “That wouldn’t be fair to our team and it wouldn’t be fair to the quarterbacks.”

Trubisky, heading into his fourth season, has a 3-2 record in starts against the Lions. He has thrown 11 touchdowns and four interceptions. Foles, a one-time Super Bowl MVP acquired in a trade with Jacksonville, hasn’t played Detroit since 2013. With the league doing away with the exhibition games, the Bears’ two QBs have had to compete in scrimmages and practices. It has been the most closely observed battle in camp but as yet neither one has stood out. Starting Foles would make a statement that Chicago does not believe they can afford another losing start to the season.

According to the best online sportsbooks, the Lions are the home faves. The league eliminated preseason games this year because of the coronavirus pandemic. Lions head coach Matt Patricia said these teams worried about missing out on breakout players when they set their 53-man rosters this week. “I think that’s the way everyone feels across the league,” Patricia said. “This is going to be a year where guys might fall through the cracks, and we might be sitting here in a couple months from now and find someone, or someone might emerge from someone’s team that no one knew anything about.” The Lions are handling this week just like any other last week of the preseason. They’re using it to try to make sure that no one gets lost in the shuffle.

Preparation for the September 13th season opener versus the Chicago Bears continues. The Lions have their second controlled scrimmage of the summer scheduled for Wednesday at Ford Field. Patricia said that will have a lot of bearing in final roster decisions. “I think it’s a big week,” he said. “I think it’s a great opportunity and one of the things that we try to do as a staff and understand that maybe where we are on the roster and some of the battles that we still have in front of us and some of the guys that are competing for certain spots and make sure that we put those guys in situations.

The Bears, not favored by sites for betting in the NFL, will win, cover the point spread, and the total will go under.