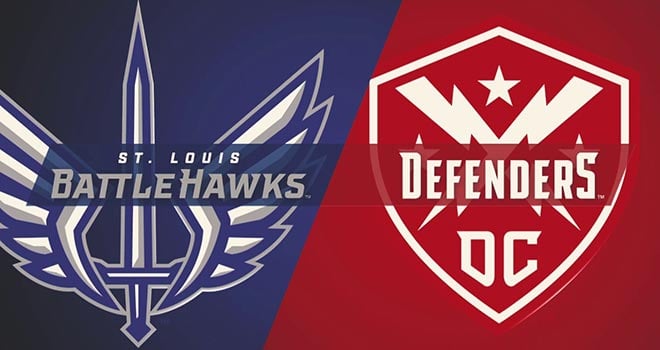 Top sportsbooks favor the SL BattleHawks by four points over the DC Defenders, as the spread goes for their XFL Week 5 regular season game on Sunday, March 8 with kickoff scheduled for 3:00 p.m. ET at Audi Field.

The Hawks won their second straight game, a 23-16 win over the Seattle Dragons in Week 4. St. Louis entered as 12-point home chalk, according to the best online sportsbooks. Starting QB Jordan Ta’amu went 20 of 27 for 264 yards with one TD and one sack. He connected with nine different targets. Ta’amu added 63 yards on 16 carries. Ta’amu was named the Week 4 Star of the Week after his performance. Wide receiver ‘Rebecca’ De’Mornay Pierson-El had 71 yards and one TD on five receptions.

L’Damian Washington caught four passes and Marcus Lucas and Brandon Reilly caught three apiece. The Hawks lost 55 yards on penalties. But still outgained Seattle 392 total yards to 253 – 259 to 128 through the air. Strong safety Will Hill made the interception that sealed the deal late in the fourth quarter. He also deflected a pass.

“You know we did a good time in time of possession, just looking at the stat sheet quickly. The one thing that obviously stuck out to me that was one thing that we definitely have to correct are our penalties. Those are the things that are going to kill us when we get in these tight games and guys are making plays and they keep bringing ’em back. We have to take care of that,” BattleHawks head coach Jonathan Hayes said.

The Defenders lost a second straight; this time a 0-25 upset to the Tampa Bay Vipers in Week 4. Top sportsbooks had DC as 2.5-point road faves. It’s also the second consecutive week an opposing team gets their first W at DC’s expense. Starting QB Cardale Jones went 9 of 22 for 72 yards with one pick and one sack. Running back Donnel Pumphrey had 66 all-purpose yards on seven carries and three catches. DC was held to just 107 total yards – 75 passing and 46 rushing – and allowed 477 total yards. Including 266 on the ground. The Defenders were 2 of 10 on third down and 0 of 1 on field-goal attempts.

On defense, safety Matt Elam and linebacker Jonathan Celestin had 12 total tackles each. Safety Rahim Moore had his second interception of the season. “They played their game. We missed on opportunities that we wanted to exploit. We just missed it. They played a great game overall, but not anything we weren’t ready for,” Jones said.

The Defenders averaged 4.5 points per game in their two-game road trip. And allowed 32 points per game. By way of comparison, they scored 29 ppg and allowed 9.5 ppg in their first two games, both at home. They outscored their opponents 58-19 in the first two weeks and were outscored 64-9 in the next two. DC has the distinction of having shut out an opponent and having been shut out themselves. Simply put, the Defenders have become careless. They have progressively committed more penalties and forced fewer TOs with each passing week.

Additionally, The DC picked up 29 first downs and gave up 24 in the first two home games of the season, and were able to extend drives by converting on 14 of 33 third downs. Moreover, they held Dragons and Guardians to 5 of 26 third-down attempts combined. Conversely, the Defenders picked up just 22 first downs in Week 3 and Week 4. And converted just 4 of 23 third-down attempts. Meanwhile, the Wildcats and Vipers combined for 49 first downs and were 7-for-20 on third down.

DC must win the turnover battle, dominate the line of scrimmage, and control the time of possession. Sounds easier said than done. Except they got it done in their first two games. I’m going to go ahead and give them the home-field-advantage-benefit-of-the-doubt and tale the Defenders and the points. Users of top sportsbooks may feel free to fade me.