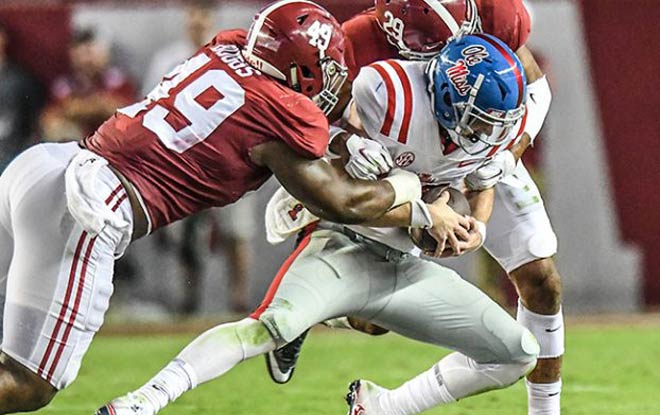 Top online betting sites favor the Alabama Crimson Tide by 21.5 points over the Ole Miss Rebels. The Tide’s vaunted defense will finally encounter some real competition. The Rebels boast one of the most complete receiving units in all of college football. “Oh yeah, they have a trio of receivers — A.J. Brown, DK Metcalf, and DaMarkus Lodge — these are three NFL caliber guys,” Alabama junior safety Deionte Thompson said. “They stretch the field at any time and they have a good quarterback to go along with that trio, so that’s something we’re going to have to be prepared for. We’re going to have to do a very good job of preparing for them this week.”

The Rebels have been scoring like crazy but have allowed too many points as well. They tallied 123 points in the first two games. But they allowed Southern Illinois 41 points and Texas Tech 27. That doesn’t bode well for their chances against Tagovailoa and the Alabama offense. On the other hand, this is a rivalry game and Ole Miss has home advantage. Hopefully that means it will be a close, exciting encounter. Senior QB Jordan Ta’amu has completed 69.2% of his passes for 784 yards, seven TDs and no picks. Alabama’s secondary has allowed 470 passing yards in the first two games. Thus, the aerial attack seems like the way for the Rebels to keep up with the Tide.