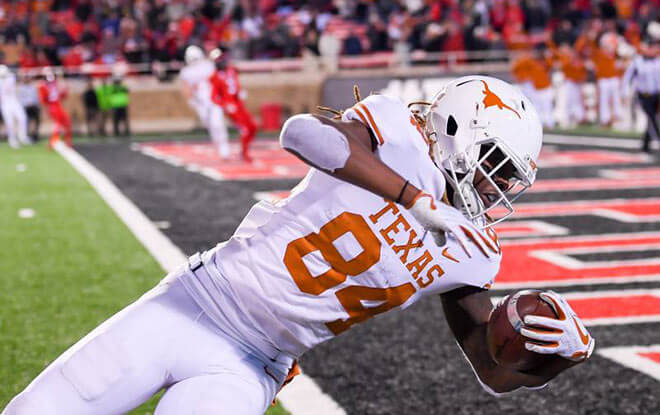 The top sports betting sites favor the Utah Utes by 7.5 points over the Texas Longhorns, as the spread goes for the 2019 Alamo Bowl on December 31, with kickoff scheduled for 7:30 p.m. EST, at the Alamodome in San Antonio, Texas.

Linebacker Juwan Mitchell has three sacks, and defensive backs Brandon Jones and D’Shawn Jamison have 86 tackles and three interceptions respectively. The Longhorns allow 139.8 rushing yards per game (47th) but 306.4 passing yards per game (127th). Texas’ 74th-ranking scoring defense has allowed at least 24 points in each of their last nine games.

Ehlinger has requested feedback on status for NFL draft. He will play in the bowl game, though. “I’m not spending any time really thinking about it, to tell you the truth,” Ehlinger said. “I want to win the bowl game and so I’ll probably evaluate and think about things from there.

Defensive end Bradley Anae has 12.5 sacks, linebacker Devin Lloyd has 85 tackles, and defensive back Julian Blackmon has four interceptions. Utah has the best total defense in the country, allowing 256.2 yards per game (185.9 passing (12th), 70.3 rushing (1st)). The Utes’ scoring defense, which ranks 4th (13.2 ppg) has allowed 30 or more points only twice this season.

“We were kind of sad, you know, very sad. But we’ve got another great opportunity to win another game right now,” Huntley said of the Oregon loss. “So we’ve (gone) out and prepared the past few days as we’ve been doing, just getting ready for this game and just fine-tuning the mistakes we made in that game.”

Utah’s airtight defense will get the job done, no doubt. Take the Utes and the points.