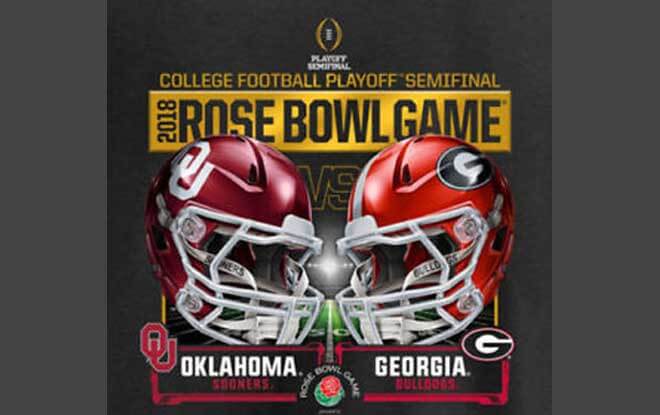 The first of the two College Football Playoff semifinals on New Year’s Day has the Georgia Bulldogs taking on the Oklahoma Sooners in the Rose Bowl on ESPN. The Bulldogs are ranked No. 3 in the country, while the Sooners are ranked No. 2. It is a matchup between the tough defense of Georgia against the high scoring offense of the Sooners led by Heisman Trophy winning quarterback Baker Mayfield. The winner of this game will play the winner of Alabama vs. Clemson for the National Championship on January 8. Georgia is listed as a slight favorite at offshore gambling sites.

The Bulldogs feature a tough defense that was 4th in the country, allowing just over 13 points per contest. Georgia doesn’t get a lot of attention on offense, but they averaged about 35 points per contest. The Bulldogs feature a strong rushing attack led by Nick Chubb and Sony Michel who combined for almost 170 rushing yards per game. Georgia has a freshman at quarterback in Jake Fromm but he played well, throwing for 2,173 yards and 21 touchdowns, with just five interceptions. The Bulldogs defense is led by junior linebacker Roquan Smith, who had 113 tackles, including 10.5 for loss.

The Sooners averaged almost 45 points per game but they gave up 25 points per game. Mayfield threw for 4,340 yards, 41 touchdowns and he had just five interceptions. He will get a big test against a Georgia defense that allowed just 158.3 passing yards per game. Mayfield said to the media it will be a great matchup. “It’s a great program. Obviously, they’re a great team. There’s a reason they’re in the playoff. So it’s a good matchup for us. I think their strength is their front guys on their defensive line, their linebackers. And our strength is our offensive line. So it’s going to be good for us.”

Mayfield said that he has been looking to find a weakness in the Georgia defense. “A lot of talented guys,” Mayfield said of Georgia’s defense. “The front seven, they don’t have a weakness. They play well together, so I think looking at them, a lot of times you look for weaknesses. With them, it’s pretty hard to find.”

Last year’s Heisman winner Lamar Jackson was terrible last year in a bowl game loss to LSU. Mayfield won’t be as bad as Jackson was, but he could struggle against a very good Georgia defense. What we do know is that Oklahoma’s defense isn’t likely to slow down Georgia very much in the Rose Bowl. We’ll lay the points at offshore sportsbooks and take the Bulldogs to get the win.