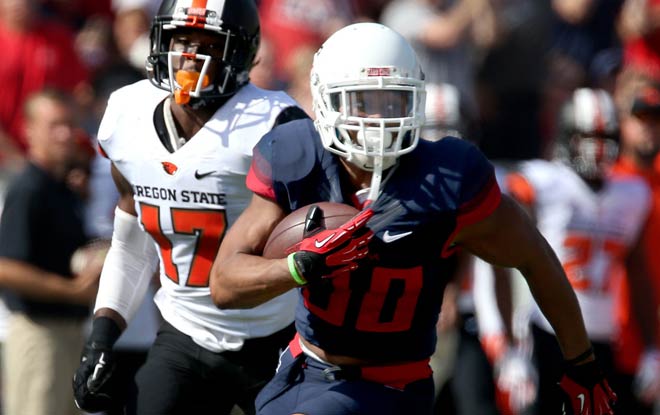 The Arizona Wildcats are 6-point online betting sports favorites against the Oregon State Beavers. Not just the best online sportsbooks see the Wildcats winning, though. According to Pete Fiutak of College Football News, Oregon State’s “offense won’t be effective enough. There’s just not enough of a passing game to balance things out. Arizona’s defense might not be anything special, but it’ll be just good enough against an OSU offense that can’t move the chains to come up with key stops.”

On the other hand, CBS Sports’ Jerry Palm believes the Beavers will win “at home in shootout.” According to Palm, “Oregon State got their hats handed to them at Ohio State and struggled against each of Southern Utah and Nevada, but the Beavers were able to score against all three of those teams.” At the same time, “the Wildcats aren’t exactly a defensive stalwart.” This is one of those games that could easily go either way.

Starting QB Khalil ‘Little Man’ Tate rushed for 1411 yards and 12 TDs last season on 153 carries. So far this season, he has rushed for only 41 yards and two TDs on 19 carries. “We’re going to play to hiss strengths but to our strengths,” head coach Kevin Sumlin said. “Obviously, he wasn’t 100 percent healthy in that game but he was still effective.” Sumlin was referring to the 62-31 win over Southern Utah. On that occasion, Tate threw for five touchdowns. His rushing, though, was negligible. This begs the question of whether Arizona’s offense can do without Tate’s running. Or whether it was just a fluke. In other words, can Tate, as one-legged man, win an ass-kicking contest?

The Beavers displayed the depth of their offense last Saturday against Nevada. OSU was without wide receiver Trevon Bradford. Fortunately, Isaiah Hodgins and Timmy Hernandez picked up the slack. The former had 200 yards on 14 catches. And the former recorded 116 yards on 11 receptions. Oregon State still went on to lose 35-37. Nonetheless, imagine the kind of damage those two could do a defense in disarray. Such as Arizona’s. Enough to cover the online betting sports spread, one would think.

As it turns out, neither team is a defensive stalwart. However, the Beavers are great deal better offensively. Which makes the online betting sports spread rather mystifying. Unless the Wildcats take a risk let Khalil Tate put the dual in dual threat, take Oregon State and the points.