Wolverines are home faves against Wisconsin at Top Betting Sites 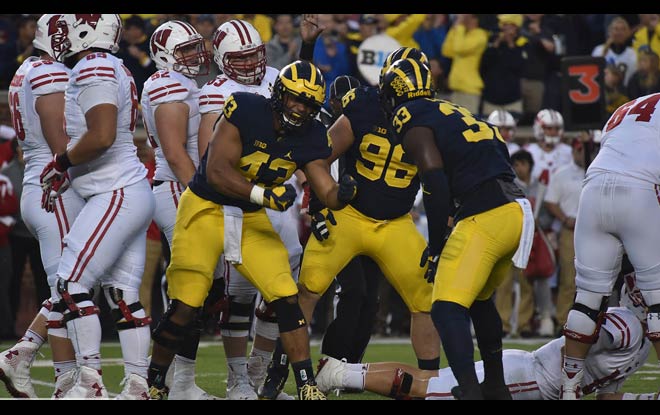 The Michigan Wolverines are 9.5-point home faves over the Wisconsin Badgers, according to top betting apps. The Wolvies have defeated the Badgies twice straight in the last two seasons by a combined margin of 21 points. Perhaps the third time will be the charm, as far as Wisconsin figuring out Michigan’s offense. “Their whole defense is talented,” UW head coach Paul ‘H.’ Chryst said. “I think any time you face a defense that’s talented and well coached, I think they have great confidence and knowledge — the players I’m talking about now — in their scheme. They play fast. And so, I think the strength of that defense is that they have a number of talented players. So, you can’t focus [on one].” Chryst has his own defense to worry about as well. Wisconsin allowed Nebraska 518 total yards and 41 points last weekend.

On the plus side, starting QB Alex Hornibrook has been picked off just twice in 114 attempts. On the downside, he has completed fewer than half of his passing attempts in his previous two starts versus Michigan. If that trend continues, the Badgers might have to lean heavily on the ground attack. Specifically, sophomore running back Jonathan Taylor. He may be one ‘Thomas’ shy of being a washed-up teen idol. But unlike Hornibrook, he delivered against Michigan, posting 132 yards against the Wolvies last season.

At 160.7, Shea Patterson has the best passer rating of any Big 10 quarterback not named Dwayne Haskins. Head coach Jon Harbaugh has compared Patterson to a basketball point guard. “I think there’s a feel there,” Harbaugh said. “Understanding the spacing of players, how close they are to you, where you can go to avoid defenders. He has a knack of making the right escape move from the pocket. In terms of scrambling, he’s really smart when he’s out of the pocket.” Patterson may not be an odds-on Heisman favorite at the top betting sites, but he’s pretty damn good regardless.