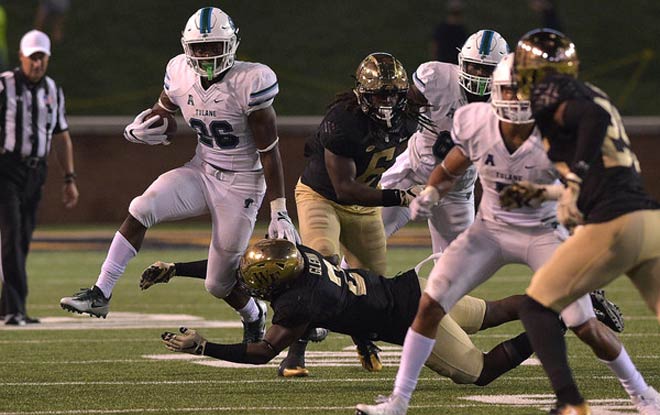 Legal sportsbooks favor the Wake Forest Demon Deacons over the Tulane Green Wave by a touchdown. And the subsequent extra point. WF head coach Dave Clawson has yet to announce his starting QB. However, it seems a foregone conclusion that Sam Hartman is going to get the nod. Especially since redshirt sophomore Jamie Newman missed Monday’s practice due to a strained quad. “We’ll announce it. But, obviously, if a guy misses time, if he’s going to miss some practices, that’s going to play into the decision,” Clawson said. “Hopefully [Newman] can come back and get out here in a few days and let’s see where he’s at. And if he can’t, that makes the decision easier. “Clearly, Hartman appears to be the best option. Just like mobile betting is the best option for many gamblers.

Whether Hartman, or less likely Newman start, they’ll have plenty of passing targets. Starting wide receivers Greg Dortch, Scotty Washington and Alex Bachman are all returning. As are running backs Matt Colburn and Cade Carney. So that the running hand will be in good hands as well. Redshirt freshmen Sage Surratt, Jacquarii Roberson, Waydale Jones and Christian Beal add depth to an already stacked offense. As does redshirt junior Steven Claude. Depth is something that the defense isn’t lacking either. Cam Glenn, Essang Bassey, Amari Henderson, Luke Masterson and Chuck Wade are the best-known names. However, underneath them are many young players waiting in the wings.

Additionally, four defensive tackles with more than 275 snaps experience last season are returning. That includes starters Zeek Rodney and Willie Yarbary. And backups Elontae Bateman and Sulaiman Kamara are not too shabby either. And not just players are returning. Defensive coordinator Jay Sawvel, safeties coach Lyle Hemphill and linebackers coach Brad Sherrod had last season to get to know each other. They should be like peas in a pod at this point.

The Green Wave fell one win short of bowl eligibility. Head coach Willie Fritz considers returning to a bowl for the first time since 2013 the litmus test for a successful season. Obviously, in order for that to happen, Tulane needs to get wins. Some might say they are their own worst enemies. “Don’t let the Wave beat the Wave,” is one of Fritz’s mantras. “I want our opponents to respect our discipline and the way we play,” he said. They should probably more concerned about not allowing Wake Forest to beat the Wave. “Football consumes us,” Tulane athletic director Troy Dannen. Yeah, like Aguirre was consumed by finding El Dorado. To quote King Lear, “that way madness lies.” Tulane could have gotten that sixth win last season. However, QB Jonathan Banks was stopped just at the goal line in the dying seconds of a 41-38 loss to SMU, the last game of a season. It seems this wave is cursed with never reaching the shore.

Our Free Pick: Wake Forest is just the better team here. And seven points is not that big a stretch.