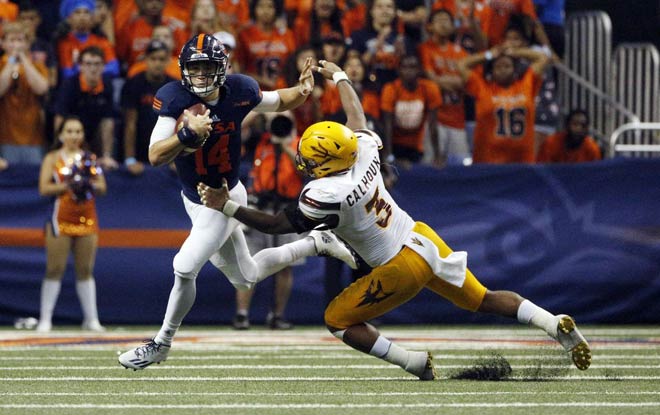 The best gambling sites are confident the so-called sleeping giant of the Pac 12 is about to wake up. Sort of like Cthulhu. The Arizona State Sun Devils are 18-point home favorites against the University of Texas San Antonio Roadrunners. Only 18 points? Seems like too little for an honest-to-goodness NFL team. What do you mean, the Sun Devils are not in fact a National Football League franchise? Coulda fooled me. Not. “In the spirit of innovation,” ASU athletic director football club president Ray Anderson said, “our vision for this program is to have a head coach who serves as a CEO and is the central leader with a collaborative staff around him that will elevate the performance of players and coaches on the field, in the classroom and in our community.” I think I’m just going to go stand over there.

The Roadrunners want to live up to their moniker and have a fast start. “Our theme this year is start fast, finish strong,” head coach Frank Wilson said. “In years in the past, we’ve wanted to start well. Other years, we’ve said finish. But to go from beginning to end is what we’re going to try to get done this year, not just at the back end to come on and play well or to start fast. But to play a complete game from the beginning until the end, 60 minutes, of getting the job done.” Both UTSA players and coaches find additional motivation in the fact that they were “snubbed” for a bowl.

“We had multiple chances to win other games, and we could have set ourselves up for a bowl game,” safety C.J. Levine said. “But this year, we can’t come up short. We have to know that we have to get more than seven games (victories) just to make it. It’s not just good enough to have six, so we’ve got to do one more than what’s good enough. We can’t just be average. We’ve got to be above average this year.”

If the Sun Devils are modeling themselves after an NFL team, that team must be the Oakland Raiders. ASU dusted off Herm Edwards and made him “CEO.” What we have here is a head coach who has not head coached in a decade. And who has not had anything to do with college football since his senior year at San Diego State. In 1975. I guess that’s what Anderson meant by “the spirit of innovation.” He probably meant that innovation is dead and all that’s left is its spirit. “Arizona State’s hiring of Herm Edwards was met with more than one raised eyebrow,” writes AP sports writer John Marshall. Either that or everyone in Arizona were doing their best The Rock impression. Nonetheless, he says Edwards is “breathing life” into the Sun Devils. Or sucking it from them.

Our FREE Prediction: The Roadrunners have a great defense, even though they lost C-USA Defensive Player of the Year Marcus Davenport. They also have a winning mentality. On the other hand, all the Sun Devils seems to have is delusions of grandeur. UTSA could conceivably pull off the upset.