USC Trojans vs Arizona U Wildcats Preview and Betting Analysis 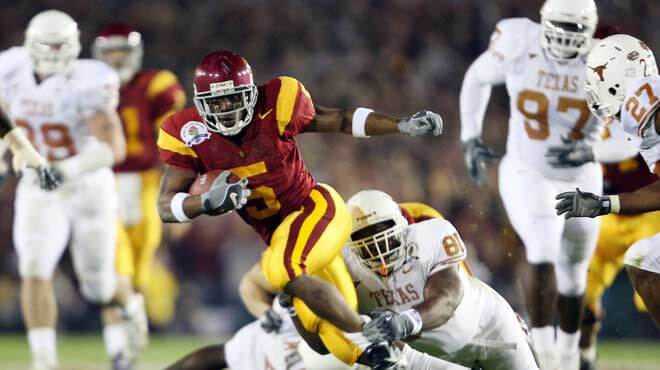 Top betting sites favor the USC Trojans by 3.5 points against the Arizona Wildcats. This game will be like a clash between erosion and a tectonic plate. In that both schools have gotten off to a slow start. The Trojans are 2-2 SU and 0-4 ATS through the first four weeks. The Wildcats are 2-2 SU and ATS in the same span. However, Arizona head coach Kevin Sumlin knows why the best online sportsbooks favor USC. Even though it’s the Wildcats that are in a two-game winning streak.

“USC is a very, very talented team,” Sumlin said. “They’ve had their struggles. They have a young quarterback, but he’s talented. They have veteran offensive line in front of him. They’re explosive on the perimeter. Special teams-wise, they’re up near the top of the league. They’re big and athletic up front and have a lot of guys who can run. We’ve got our work cut out for us this week.”

The young and talented QB Sumlin mentioned is none other than JT Daniels. The true freshman is balls-deep into the deep ball. Daniels has completed many 20 yards or more passes in the first four games of the season. Seventeen to be exact. And he has thrown eight that have gone for more than 40 yards. Case in point, the Trojans’ 39-36 win over Washington State on Friday. Daniels threw five 20-plus-yard passes. That included a 30-yard touchdown to Amon-Ra St. Brown. As well as a 50-yard touchdown to Michael Pittman. In the latter case, though, most of the yardage was achieved through Pittman’s legwork.

The top betting sites spread for this one is so small that not just a big play like the ones described above could make the difference. Even the oft-underappreciated special teams could be the deciding factor. Which is something that Sumlin knows full well. The Wildcats special teams have been truly special in the past two weeks. J.J. Taylor returned a kickoff 84 yards for a touchdown against Southern Utah. And Arizona gained a decisive first down on a fake field goal in the third quarter against Oregon State.