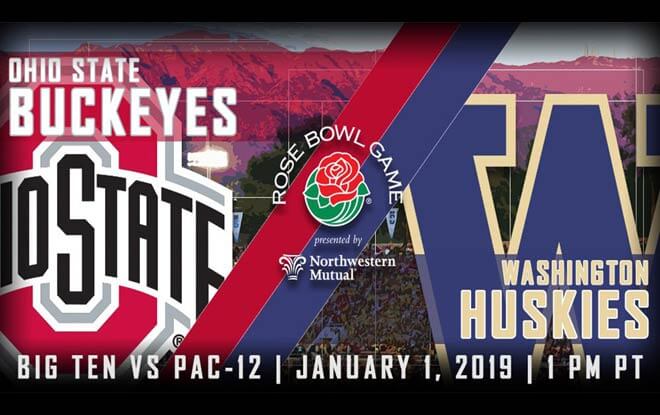 Legal betting sites favor the Ohio State Buckeyes to beat the Washington Huskies by seven points in the 105th Rose Bowl. OSU was the Big Ten East division co-champion and championship game participant. The Buckeyes went 12-1 (8-1 in conference play) and 6-7 ATS this regular season. They defeated Northwestern in the Big Ten championship game 45-24 as 16.5-point favorites. This will be Ohio State’s seventh straight bowl appearance and 15th Rose Bowl.

UDub was the Pac 12 North division co-champion and championship game participant. The Huskies went 10-3 (7-2 in conference play) and 4-9 ATS this year. Washington bested Utah 10-3 as 4.5-point faves in the Pac 12 championship game. They return to a bowl game after losing 28-35 to Penn State in the 2017 Fiesta Bowl. It will also be their 15th Rose Bowl.

The Huskies are done with their finals. But their bigger test is yet to come. Figuratively and literally. And that test is 6’3”, 220-pound OSU quarterback Dwayne ‘The Rock Johnson’ Haskins. “Big dude,” defensive lineman Benning Potoa’e said. “We’re going to have to get to the quarterback. We must get to him. Get him off his game. Get him off his spot. … I know he’s good at maneuvering around, moving his feet, so we’re going to have to do our job. Contain him and don’t give him gaps to escape.” That’s a good strategy. Because you can’t stop Dwayne Haskins. You can only hope to contain him (shout out to Brandon Walsh and Steve Sanders).

You can’t blame the Huskies for standing in awe of Haskins. The massive signal-caller has 47 TDs and eight picks on 4580 passing yards. He completes 70.2% of his passes and has thrown three or more TDs in nine of 13 games this season. Thanks to Haskins, OSU ranks No. 2 in total offense (548.8 yards per game). As well as in passing offense (373 yards per game). And No. 8 in scoring offense (43.5 points per game). Even at half throttle, the Buckeyes should be able to cover the legal betting sites spread.

It’s beginning to look a lot like… New Years.

Welcome to Game Week! 6 days until The Granddaddy of Them All, the 105th #RoseBowl Game! pic.twitter.com/jzDB6RxsPX

Our Game Prediction: The 2019 Rose Bowl will be head coach ‘Pope’ Urban Meyer’s swan song. According to legal betting sites, he is 11-3 SU in bowl games. You better believe he is going to do his damndest to make it 12-3. If for nothing else, to go out with a bang. And not the whimper that was his administrative leave at the start of the season. The Buckeyes were hoping to return to the College Football Playoff. The Rose Bowl is their consolation prize. And as consolation prizes go, a New Year’s Six bowl is not too shabby. Moreover, the fact that it’s Meyer’s retirement game makes it the program’s most meaningful game in a long time. If not ever. Bottom line, take Ohio State and the points.