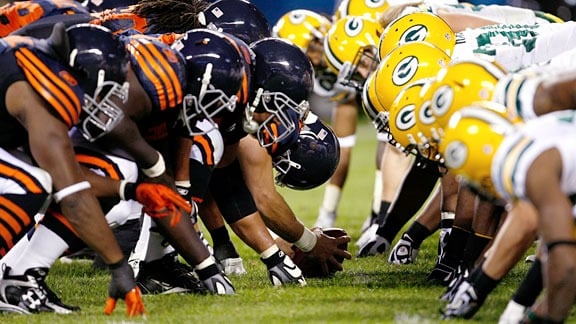 The best legal betting websites favored the Green Bay Packers by eight points against the Chicago Bears. Now the best online sportsbooks favor them by seven points. However, even the Chicago Tribune writers don’t believe the Bears can pull the upset. They also all agree that the Packers will not cover the spread. Similarly, ESPN’s FPI favors Chicago to win just four games. And none of those games is against Green Bay. In fact, “the FPI has them with very little chance against the Packers in Week 1,” writes Lorin Cox of NBC Sports. However, if the Bears want to steal the win, they need to look back. Back to a 17-13 Chicago victory on Thanksgiving three years ago.

On that occasion, cornerback Tracy Porter picked Aaron Rodgers off late in the fourth while the Bears were ahead by four points. In general, Rodgers attempted 43 passes and just four resulted in a gain of 15 yards or more. Additionally, the Packers were 3-for-11 on third downs. The Bears should also hit the Packers where it hurts them the most; i.e., the middle. Inside linebacker Blake Martinez is nothing out of the ordinary. And Oren Burks is dealing a shoulder injury and may not see too many snaps. Tight end Trey Burton and running back Tarik Cohen Martinez could get Burks and Antonio Morrison into a lot of trouble.

Green Bay rookie defensive backs Josh Jackson and Jaire Alexander will most certainly be used in certain packages. Both are aggressive but still very green. They could vulnerable to big plays if they take chances that they are not ready for yet. And now for those updated lines from one of the best betting websites, MyBookie.ag.

There is something that else that is not quite right with the Packers. And that’s wide receiver Jordy Nelson’s absence. Nelson was Rodgers go-to guy for as long as we care to remember. But one team’s loss could be one man’s gain. And that man could be wide receiver Geronimo Allison. G-Mo waxed and waned last season. He had six catches for 122 yards, and a 72-yard catch-and-run on third down in OT to set up a winning field goal in an early-season win against the Bengals. On the other hand, he fumbled late in the fourth quarter in a loss to the Panthers. And we can’t forget tight end Jimmy Graham. Green Bay signed Graham to a three-year, $30 million contract.

Graham set the Saints franchise record for receptions in a season and also tied the Saints franchise record for touchdowns in a season. He is also second all-time for most receiving yards and receiving touchdowns by a tight end in a single season. The Packers offense will have to contend with Khalil Mack. The Oakland Raiders traded Mack and a 2020 second-round pick to the Chicago Bears for 2019 and 2020 first-round picks. Shortly after, Mack became the best paid defensive player in the league. According to Chicago defensive end, “know those five guys can’t block Khalil Mack,” referring to Green Bay’s offensive line. “I think the question every team is going to ask is, how do you block Khalil Mack? So him being there, it just gives me more freedom to have one-on-ones.” “Can you tell how excited I am to have my new teammate?”

Mack may be the reason the Bears are seven, instead of eight-point underdogs. But can be he the reason Chicago upsets the Packers? Not likely, though also not impossible either.