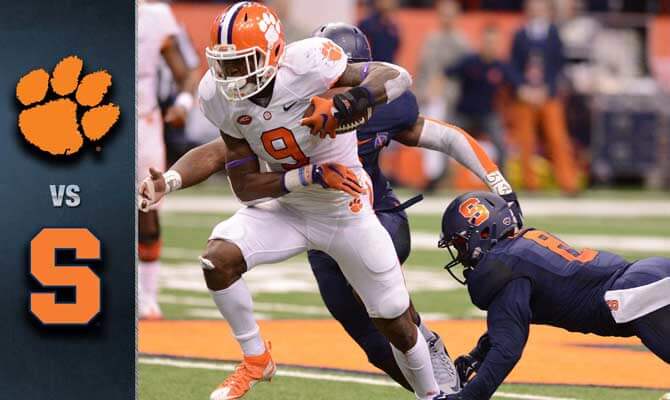 The best College Football sportsbooks favor the home team when the Syracuse Orange and the Clemson Tigers play on Saturday in college football action from the Carrier Dome. Syracuse enters at 1-4 so far. The Orange picked up a win over Georgia Tech, but have lost to North Carolina, Pittsburgh, Duke and Liberty. Clem is sitting pretty at 5-0. The Tigers have taken care of Wake Forest, the Citadel, Virginia, Miami and Georgia Tech.

The Orange Crush is a big road underdog according to the best online sportsbooks. No. 1 Clemson has been ranked in the top three teams in the country going into each of their last six games. “You get an opportunity to play the No. 1-ranked team in the country,” Syracuse head coach Dino Babers said.
“Whether you are injury-free or not, whether you are playing with all seniors or all freshmen, you get an opportunity to compete. No one expects you to win outside the family, and to be able to compete in a situation like that, to measure up and see where you’re at, we’ll see.”

The gap seems to be wider this season than any other. The Tigers are the top team in the country, unbeaten (5-0, 4-0 in ACC) and coming off a 73-7 win over Georgia Tech. Syracuse is 1-4, including 1-3 in conference play, and is coming off a 38-21 home defeat to Liberty.

Syracuse has been struggling with injuries this year. That explains why the Orange will be starting three freshmen on offense as well as four on defense on Saturday. Both starting QB Tommy ‘Goodfella’ DeVito and starting All-ACC safety Andre Cisco are gone for the season. Senior Rex Culpepper will get the gig at under center against Clemson.

The Tigers are heavy home chalk per the best College Football sportsbooks. Clemson has won 26 straight conference games. their last loss came precisely at Syracuse in 2017 by a 27-24 score. The Tigers quarterback Trevor Lawrence is 29-1 as a starter. Running back Travis Etienne has been named ACC Player of the Year each of the prior two seasons.

Lawrence has completed passes at a 73% rate and has 15 TD passes and one pick this season. Etienne needs just 129 yards to break the ACC’s career rushing yardage record of 4,602. A record held by former N.C. State standout Ted Brown since 1978. The Tigers are vying for a sixth straight ACC title and a sixth consecutive berth in the College Football Playoff. They rank third nationally in scoring at 48.2 points per game and total defense, allowing just 264.6 yards per game.

Users of the best sportsbooks should go with Clemson. The line on this game is going to be thick everywhere you look. Especially following the Tigers’ 66-point win last game.
‘Cuse has been respectable when it comes to scoring points so far this season. But they’ve had some problems against the tougher competition. And no competition is stiffer than Clemson. Syracuse is not likely to get even close here.