Taking A Sportsbook Look at the McGregor vs. Nurmagomedov Rumors 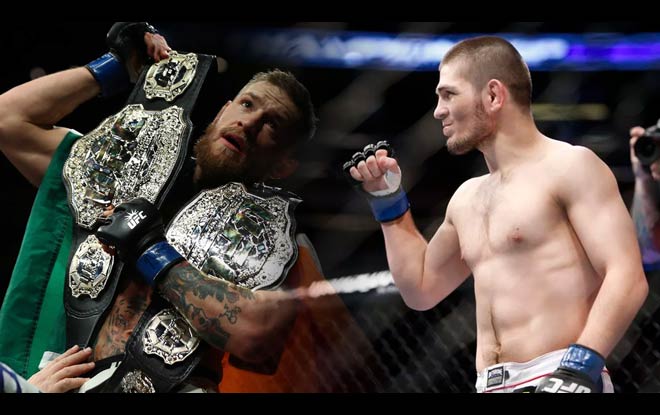 The latest news out of the UFC has sent the biggest sportsbooks scrambling. Although yet unconfirmed, and although Dana White put on his usual face of denial, it seems that the McGregor vs. Nurmagomedov talks are officially underway. Make no mistake, this will be the biggest fight the promotion has ever put together. And even though it won’t be held in Russia, every UFC fan in the world will be tuning in for this spectacle. So what’s the latest talk on the town?

Most of the rumors surrounding this bout stem from a comment Nurmagomedov made during an interview, in which he confirmed that the bout is officially underway. Although Dana White recently made some comments that suggest otherwise, Nurmagomedov isn’t the type of fighter to make stuff up. Therefore, we can confidently assume these talks are underway.

So, with those in mind, we can expect this bout to be scheduled for the second half of the year, possibly in November. Now that this fight is all but confirmed, what kind of turnout can we expect when these two lock themselves in a cage?

Without a doubt, this bout will have no equal. For starters, McGregor’s decision to storm a bus and throw a dolly through a window has only brought more attention to this bout. With the move, McGregor may have alienated some of his fan base and opened the door for a flurry of lawsuits. But at the same time, McGregor let everybody on the planet know there’s beef with him and the Russian. No one is condoning his actions as they were not only reckless, but also extremely dangerous. But let’s be honest, the UFC is in the business of making money and this is great for business.

As far as how the fight will go, it’s looking like it will be one of two things. Either McGregor gets the best of Nurmagomedov early in the fight and knocks him cold, or the Irishman gets mauled by Khabib’s sambo.

McGregor’s genetics allow him to deliver one of the hardest punches in the sport. We’ve seen this time and time again. Coupled with McGregor’s impeccable jeet-kune-do-esque timing, and it’s easy to see why McGregor is as dominant as he is. His extremely-high fight IQ allows McGregor to understand the standup game better than most. This lets him find the windows in his opponent’s movement and unload the snake that is his left hand. More often than not, his opponents aren’t getting up after it lands. However, this uses a lot of fast-twitch muscles. Subsequently, McGregor gets very tired as the fight goes on. This is likely a result of a lack of conditioning, but is ultimately rooted in his genetics – which mold his fight style.

Now Nurmagomedov is the opposite of that. His muscles aren’t designed to move fast. Rather, they’re engineered to be a vice grip. This is the epitome of the Russian’s fight style; he outmans you, gets you on the ground, and continues to pummel you until you’re questioning every decision you’ve made in your life. It’s not really a question of whether or not Nurmagomedov will get McGregor to the ground. After all, Khabib gets everyone to the ground, including his training partner, UFC Light Heavyweight Champion Daniel Cormier. With that in mind, the question now becomes: can Nurmagomedov avoid McGregor’s touch of death long enough to get him on the ground?

Because once McGregor is on the ground, the fight will be effectively over.