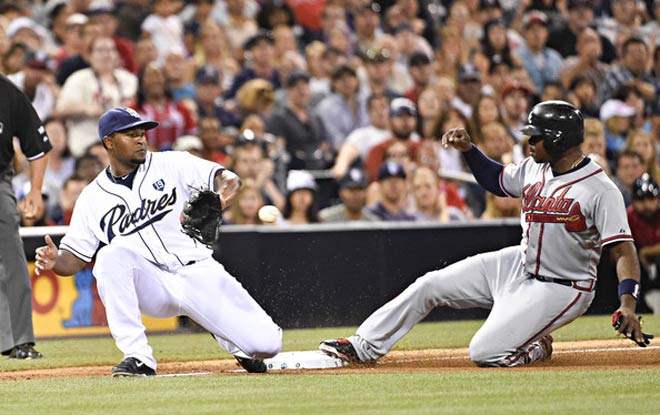 The best offshore sportsbooks can’t wait for the final game of the Padres vs. Braves four game series on Sunday. So much so that we’re just going to skip the third game, to be played on Saturday. We can, however, take some time to speak about Friday’s game. It was a doozy. Especially the seventh inning, during which shortstop Freddy Galvis alone went 5-for5. He also drove in four runs. As a whole, the Padres had 14 hits. Or, as LL Cool J would say, 14 Shots to the Dome. Meanwhile, the Braves went hitless and struck out five times in the last three innings. The Padres won 9-3.

“I’m thrilled with what’s going on right now,” manager Andy Green, who was ejected, said. “I think what we are doing now is streaming better baseball together on a more consistent basis. With the bullpen we are able to run out, [it has] been really good at locking down games for us.”

Nonetheless, the Padres went into Saturday as +165 dogs. If you believe the best offshore sportsbooks. And you should. We certainly do. Even if the Friars don’t. They thrive in the face of adversity. Or at least they did on Friday. Not only were the Padres down on the scoreboard, but Green felt umpire Joe West had it in for them. Green didn’t keep his feelings to himself and was, as a result, ejected for the second time this season. But everything changed in the seventh with Galvis tearing up the pea patch, as the expression goes. In addition to Galvis’s four hits, which included one homer, Clayton Richard also contributed on defense. Richard allowed three straight singles to load the bases with one out in the bottom of the second.

He redeemed himself, though. He and the Padres’ defense stopped Atlanta from taking the lead in the bottom of the third. They cut down both Dansby Swanson and Freddie Freeman as they attempted to score the go-ahead run from third. On both plays, Eric Hosmer opted to track the runner advancing home instead of the out at first. And on both occasions, his gamble paid off.

The Braves went into Friday as -195 faves, per the best offshore sportsbooks. Freddie Freeman had his 15th home run on Friday. However, the bullpen let the Bravos down. Sam Freeman, Peter Moylan and Luiz Gohara surrendered seven runs in just three innings. Julio Teheran is expected to return from the disabled list on Sunday. Which may or may not be good news, depending on how you look at it. Teheran’s speed sank as low as the mid-80s in his last start. That start was, coincidentally, against the Padres. Teheran has complained of staggered arm soreness ever since. Additionally, he has allowed 14 home runs this season. That’s third most in the National League. Moreover, his 4.31 overall ERA went as high as 6.11 across his last five outings.

Finally, his 56 strikeouts to 33 walks would equal the worst ratio of his career. But Teheran remains optimistic. The Braves collectively remain optimistic. Especially considering that starters such as Anibal Sanchez, Brandon McCarthy and Sean Newcomb have benefitted from extra rest. And Teheran has had plenty of rest while recovering from a thumb contusion.