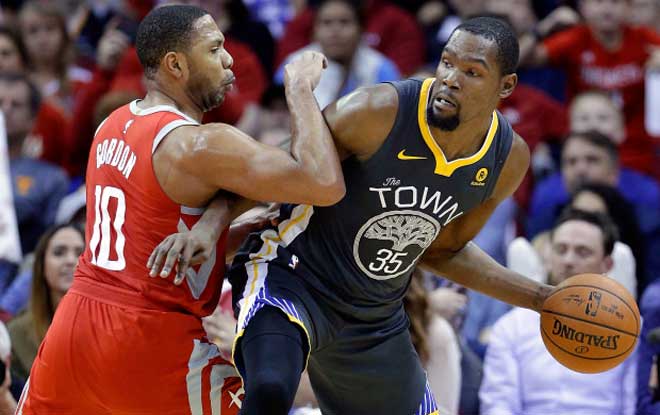 Well it’s official, the Warriors are officially down 3-2 in their series against the Houston Rockets. And while the biggest sportsbooks on the web are pegging Golden State as massive betting favorites at home in Game 6, the Warriors now need two back-to-back wins over James Harden & Co. to earn a ticket to the NBA Finals. Needless to say, beating the Rockets consecutively is damn near impossible. But the same was true about Golden State. The Warriors hadn’t really lost two in a row this season, until they faced Houston in these Western Conference Finals. Is there any hope for Golden State to make it out of this series?

The Rockets come into this matchup with a heap of confidence and momentum after beating Golden State back to back. And with the first of those matchups being on the road, there’s no guarantee Golden State makes it out of this weekend’s matchup alive. Obviously James Harden and Chris Paul have been leading the way for the Rockets. Harden has been the more impressive one but what has truly been impressive is seeing how well the Rockets are containing the Warriors. Normally you have to outscore Golden State to beat them, engaging them in a shootout. But instead of taking that approach, we’re seeing the Rockets employ some eye-catching defense. If they can keep that level of defense, they will undoubtedly come out on top this evening.

The Warriors are pegged as massive betting favorites this evening. Not so much because they’ve shown sportsbook something that makes it clear that they’ll come out on top this evening. But rather because bookies can’t imagine the Rockets eliminating Golden State in the Warriors’ backyard. But the real question is, can NBA bettors imagine it? Well, considering the odds Houston is facing in this one, bettors certainly have some motivation to get that imagination into gear.

Best Sportsbook Bets to Make: The safest bet is to take the Rockets to cover that whopping 12-point spread. The most lucrative bet would be to take Houston straight up.