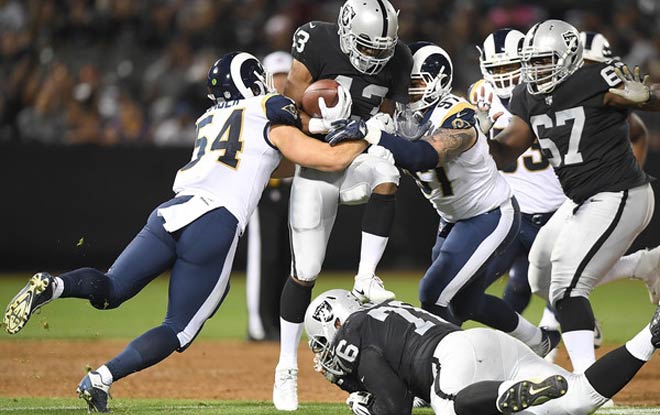 Legal betting websites had the Los Angeles Rams as three-point favorites against the Oakland Raiders. Since then the Raiders traded outside linebacker Khalil Mack to the Chicago Bears. Now the best online sportsbooks favor the Rams by four points. And speaking of trades, Oakland acquired QB AJ McCarron from the Buffalo Bills in exchange for a 2019 fifth-round draft pick. McCarron will serve as Derek Carr’s backup. And he hopes it remains that way. “God forbid I get in there, it’s not going to be perfect,” McCarron said. “But I know how to battle and keep trying.” Carr has been learning head coach Jon Gruden’s offense since April. Previous coaches Dennis Allen and Jack Del Rio delegate Carr to the offensive coordinator. Gruden, however, knows that if you want something done right, you have to do it yourself.

“Whenever we’re not doing something, we’re together,” Carr said. “If we’re in an offensive meeting. If we’re not in an offensive meeting, I’m sitting right next to him in the quarterback room. If I’m not in on a rep, I’m standing right by him. He’s [saying,] ‘Hey what do you think? What would you get to here? What would you do? What would you do?’ That’s the way it should be. He challenges me. He pushes me. He wants the best for me. You can tell that with his preparation every day. He’s ready every day to give me something to let me dominate that day. It’s awesome.” Gruden is an expert at unlocking a QB’s potential. He did so with Rich Gannon and Brad Johnson. And now he hopes lightning will strike thrice.

But now let’s have a look-see at those odds, taken MyBookie.ag, one of the best sports betting websites:

The Raiders lost Mack. The Rams, on the other hand, regained defensive tackle Aaron Donald. He had 32 tackles and 11 sacks last season even though he missed the first game of the season. As a result he was named 2017 AP Defensive Player of the Year. Donald joins defensive end Michael Brockers and nose tackle Ndamukong Suh. The Rams’ defensive line should instill the fear of the lord in opposing offenses. “We’ve been missing that little puzzle piece, the final piece, so it’s been awesome,” Brockers said of Donald. “He’s been making some great jokes, and we’re just happy to have him back. … A.D. is a pro. He’s been studying the playbook. He’s been watching film. Literally, we plugged him in, and he knew everything he’s supposed to do. We haven’t had to slow down at all. We honestly picked up the tempo.”

Offensively, the Rams lost wide receiver Sammy Watkins but acquired pass-catcher Brandin Cooks. The former Patriot has posted 1000+ receiving yards in each of the last three seasons. Then again, he was working with two of the best QBs in the biz, Drew Brees and Tom Brady. However, he is looking forward to working with head coach Sean McVay and quarterback Jared Goff. “What they had going on, even before I got here, you saw something special going on with this team and the coach,” Cooks said. And Goff is just as thrilled. “He’s so freakin’ fast,” Goff said of Cooks. Sometimes brevity is not in fact the soul of wit. McVay expects Cooks to lead the receiving unit. Just like Todd Gurley leads the ground attack. Gurley rushed for more than 2,000 yards from scrimmage and led the NFL with 19 TDs. He was named AP NFL Offensive Player of the Year. In the battle between DPOTY and OPOTY, sports betting websites expect the latter, and the Rams, to prevail.