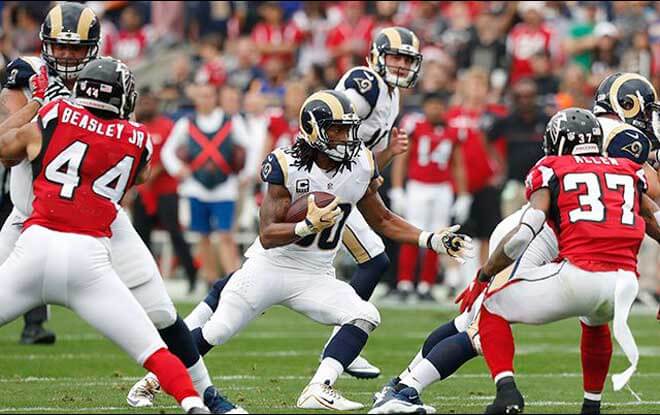 The Los Angeles Rams have fizzled after a nice start to the season. But were they playing all that well as they got off to a 3-0 record? That is an interesting question to ponder moving forward.

Now they have made a major player acquisition as they try to get over the .500 mark with a game against the Atlanta Falcons in NFL action that is set to begin at 1 PM ET on Sunday at the Mercedes-Benz Stadium in Atlanta.

Remember that as BetAnySports customers watch this game on Fox Network, they can place wagers in real time. That happens by accessing the technology available through Live Betting Ultra.

And they are infused with reduced juice, which helps you avoid having to lay the customary -110 on football:

The Rams made a big move to upgrade the secondary this week. They reached out and acquired Jalen Ramsey from Jacksonville in exchange for high draft choices. To make room, they shipped Marcus Peters off to Baltimore.

Ramsey had come up with a “back injury” so that he didn’t play with the Jags, shortly after requesting a trade. Well, he got what he wanted, although this kind of thing can’t possibly good for the NFL long-term. Ramsey is hopeful of being in action on Sunday. And it’s possible that he’ll see his share of one-on-one work against Julio Jones.

Thus far the Rams have allowed opposing passers to complete 64% of their throws, and have intercepted five passes.

Todd Gurley sat out last week’s game against the 49ers with a quad injury. The effect of his absence was that the Rams were not able to work their play-action game. And that is so important as the basis to their offense. Jared Goff had all of 78 yards through the air.

If you recall, down the stretch last season Gurley was ineffective with a mysterious knee injury. But the Rams were able to get by because they had CJ Anderson in the backfield.  He did a tremendous job. But Malcolm Brown, as useful as he can be, is not CJ Anderson. And he’s certainly not Gurley.

So you can imagine how vital it will be to get one of the league’s top running backs into the lineup again. He was practicing on a limited basis this week, so we’ll assume that he is likely a “go.”

Falcons need more than one dimension

Atlanta’s offense doesn’t have much balance. They have passed the ball 69% of the time. And even though Matt Ryan has put up some numbers (2011 yards, 72% completions, 14 TD’s), there is only one win to show for it. So it’s not unreasonable to conclude that while the Falcons have the capability to pull off a surprise (as they did against Philadelphia), the battle of styles would have to break their way. Remember that the Eagles are one of the league’s best in stopping the run, but had a banged-up secondary. The Rams, with cornerbacks Ramsey and Aqib Talib, aren’t very likely to get burned on a regular basis by wide receivers Jones and Calvin Ridley. Does that mean tight end Austin Hooper sees extended duty? That’s quite possible; Hooper is their leader with 42 receptions.

No, the Rams don’t appear to be the same team they were last season. But we’re confident of a “bounce-back” offensively. This Atlanta defense has just five sacks, 15 touchdown passes allowed with only two interceptions. The Falcons might put some points on the board. Butut there is plenty of room to move with this pointspread. So we’ll lay it.

BetAnySports offers you great value as they give you better odds with reduced juice. You can take advantage of that, as well as the opportunity for real-time wagering through Live Betting Ultra……. Open up an account for yourself with a debit or credit card, person-to-person transfer or the virtual currency of Bitcoin. It’s fast and easy with their automated system, and NEVER incurs a transaction fee!