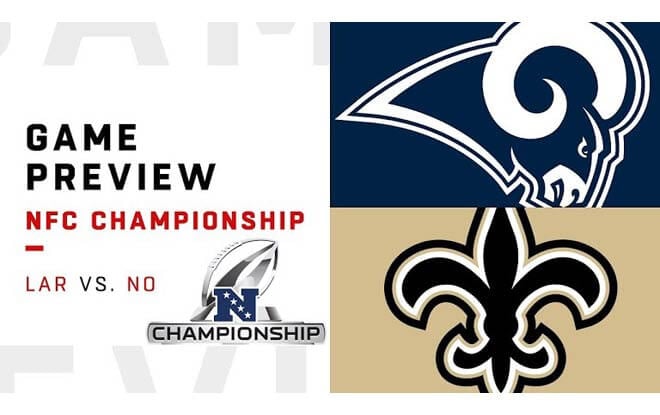 Legal betting sites favor the New Orleans Saints by a field goal over the Los Angeles Rams at the 2019 NFL Conference Championship game. The Rams had, this season, their best start since 1969 (8-0). However, the Saints put an end to that happy crappy when the Horned Ones visited the Mercedes Superdome in Week 9. On that occasion, the Holy Ones upset the Rams 45-53. The latter were, according to the best online sportsbooks, two-point road favorites. Sean McVay channeled his inner Jasper and told Sean Payton, “you sunk my battleship!” Or something. Here’s something that McVay did actually say: “It’s going to be a great challenge, especially just having to deal with that atmosphere and that environment with those fans going crazy.” Cornerback Marcus Peters also enters this game with the proverbial chip on his shoulder. What with NOLA receiver ‘Phillip’ Michael Thomas making Peters his small female canine last time around and such.

Peters will probably be relieved from the thankless task of guarding Thomas, though. Fellow corner Aqib Talib will likely be entrusted with the Herculean labor. That being said, the Rams’ defense has been exceptional this season. Especially the d-line. Aaron Donald had 20.5 sacks and 59 tackles. And Ndamukong Suh and Michael Brockers had 5.5 sacks between the two. According to legal betting sites, the Rams were 6-2 SU and 4-4 ATS on the road this regular season. However, they also are 0-3 SU and ATS in their last three trips to the Big Easy.

Michael Thomas had 211 yards and one TD on 12 catches in Week 9 against the Rams. Additionally, he rushed for 171 yards and one TD on another 12 receptions versus the Eagles last weekend. And speaking of the Eagles, the Saints held Philly to zero points in the last three quarters of their divisional game. NOLA’s defense has allowed fewer than 17 points per game since Week 7.

Our Game Prediction: It’s all but a foregone conclusion that the Saints will beat the Rams for a Super Bowl spot. The question is by how much. The last time they met, as mentioned above, New Orleans won by a 10-point margin. But this is the postseason and the Rams have presumably learned enough from experience to make it closer. Moreover, the Saints are more interested in winning than in covering, as I guess they should be. They are 1-5 ATS in their last six games as favorites, per legal betting sites. Then again, the Rams are 2-11-1 ATS in their last 15 games as underdogs. All things considered, you might feel safer betting on the over. These two teams reached 80 points in Week 9. Thus, 56 points seems like a breeze. Or should that be Brees? Furthermore, the over is 4-0 in the previous four NFC championship contests.