Pro Football Betting: Darnold Back For Jets – With Extra Protection 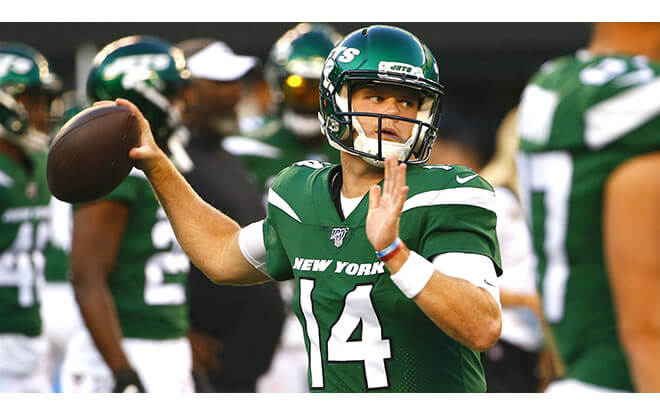 Home team gets a lot of points from Cowboys.

The New York Jets‘ season has taken a tumble, to the point where it’s all but a lost cause. With no wins to show for their efforts, the Jets may seem a little desperate in turning to their starting quarterback. His absence had doomed them to this fate in the first place. What does it mean as he comes back?

Sam Darnold, previously sidelined with mononucleosis, is slated to return on Sunday as the Jets take on the Dallas Cowboys. Game time at MetLife Stadium in East Rutherford, NJ is scheduled for 4:25 PM ET.

At BetAnySports you can get reduced juice before the game starts. And then the chance to do real-time wagering as you access what is available with the software from Live Betting Ultra.

And here are the numbers on the game, with reduced juice…..


You’ll see that the Cowboys are a road favorite:

Look at that closely – you don’t see where you have to lay -110, do you? That’s because you get “reduced juice,” which helps you avoid that. It’s great value, and a great deal. Sign up and find out how!

Sam’s back – but what does that mean?

Darnold was the guy who was going to make strides as a sophomore, but that got short-circuited. Mono isn’t anything to be taken lightly. It causes, among other things, an enlarged spleen. And that is such a serious matter that doctors have hinted at severe health risk, even death, if Darnold got back onto the field and competed before he was ready.

Understandably there is panic. Adam Gase has to thinking about how his employers are evaluating him. The offense has been held nearly scoreless, and Gase is the supposed offensive “guru” who could find a way, no matter what. But he stuck with Luke Falk after Darnold and Trevor Siemien went down (perhaps out of necessity). And all the Washington State product has managed is three interceptions and 16 sacks.

Le’Veon Bell was supposed to be a revelation. But he’s averaging less than three yards a carry and six yards a catch. He’s happy to have Darnold back, but is this too soon? The doctors had indicated a lober process for recovery at the outset, and that Darnold would be “weak” before he fully recovered.

They are going to be fitting him with special padding to protect his spleen. Just the thought of that sounds scary. He’ll be wearing something like a flak jacket in the abdomen area. But we don’t imagine the Cowboys are going to be letting up.

Keep in mind that the Jets blew a 16-0 lead and lost even WITH Darnold in Week 1, and he’s thrown for just 4.3 yards an attempt. So don’t expect offensive revolution immediately.

Jets’ defense has been a bright spot

When you consider the way the Jets have played on the offensive side, the defense hasn’t played badly at all. And obviously a lot of the credit for that has to go to the efforts of Gregg Williams. He brought an aggressive, nasty attitude and the Jets have done as well as they could under him.

They’ve been pretty tough on opposing ground games. In fact, they’ve allowed just 3.4 yards per attempt. And they have allowed just five touchdown passes in four games. They are actually ranked in the top half of the NFL drive stats in just about every category. However, a glaring exception to that is red zone defense, where they are 31st.

Can the Jets slow Dallas down enough?

It is nice that the stop unit hasn’t ganged up on the offense for being completely non-supportive. Well, at least we THINK that’s not the case. But for purposes of this discussion, they may at least keep the Cowboys off-balance a little. And we say that especially if they can prevent Ezekiel Elliott from running wild. Dallas may have both offensive tackles intact here. But Tyron Smith and La’il Collins are far from 100% healthy.

Do NOT expect offensive explosion from these Jets. And remember that the Cowboys have played eleven of their last 14 road games UNDER the total. We think that’s the direction we’d like to go in.

And speaking of direction, here’s the one YOU should go in…


Sign up with BetAnySports, where they give you an opportunity to get better odds before the game with reduced juice, as well as real-time wagering after the kickoff with Live Betting Ultra……… You want some casino action? Check out the Lucky Live Dealer Casino for some kick-ass Asian games and more………. Make your deposits using a debit or credit card, person-to-person transfers, or the virtual currency of Bitcoin, which is fast and easy with their automated system, and NEVER incurs a transaction fee!