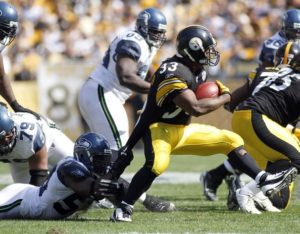 The Steelers are coming off of a bye week, and have won their last two NFL betting games, the big victory for Pittsburgh was against the Browns on Sunday, November 15 and they beat Cleveland 30-9.

A great return of Ben Roethlisberger after his foot injury, he came off the bench in that occasion and lead the Steelers to a great win.

This coming betting game against Seahawks is not a big deal for Pittsburg because they are been winning against Seattle for almost ten years, a date that we can remember very well was the 2006 Super Bowl, Steelers defeated the Seahawks 21–10 on that game.

We will see a great performance since we are going to have two of the best quarterbacks in the league on the field this coming Sunday.

The stats are in benefit of the Seahawks, the Offense passing yards is 248 yards against 237yards for the Steelers, the rushing yards average is 135yards versus 96yards for Steelers and last one of the more important elements in the games the total points per game, Seattle is average an excellent point scoring at 23points per game and Pittsburgh 19points.

With those numbers all top sportsbooks are taking the Seahawks as -3.5-point favorites versus the Steelers, and the total for the game is set at 43.5.

Seattle will put some pressure since the beginning of the game in order to start winning and take advantage on this game since both teams still in the playoff hunt and both need a win this week.