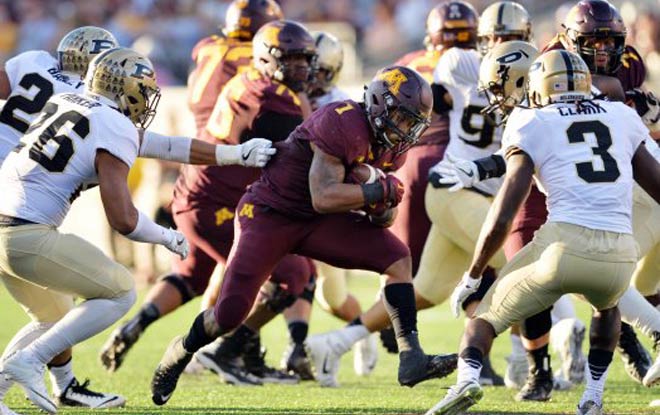 The No. 4 Penn State Nittany Lions are seven-point road faves over the No. 17 Minnesota Golden Gophers, as the legal online sports betting spread goes for their Week 9 NCAA football game on November 9 at 11:00 a.m. CT at TCF Bank Stadium in Minneapolis, MN.

The Lions retained their undefeated status against Michigan State in their latest outing. PSU won 28-7 as 5.5-point road chalk, according to the best online sportsbooks. Starting QB Sean Clifford went 18 of 32 for 189 yards with four TDs and one pick. Wide receiver Pat Freiermuth was the recipient of three of those passes. He had 60 yards on five receptions. Running backs Journey Brown and Devyn Ford combined for 70 yards on 18 carries. As ever when the offense has a rare off-day, the Lions’ defense, especially against the rush, came through. Penn State held the Spartans to just 83 yards. PSU has the second-best rushing defense in the country, allowing just 68.4 yards on the ground per game.

The Gophers are undefeated as well. They beat Maryland 55-10 last time out as 14.5-point home favorites. Starting QB Tanner Morgan went 12 of 21 for 138 yards with two TDs and one pick. Wide receivers Chris Autman-Bell and Rashod Bateman combined for 95 yards and one TD on seven catches. Running back Rodney Smith had 103 yards and one TD on 17 carries. The Gophers outgained Maryland 498 total yards to 210 and held the latter to just 79 rushing yards.

Minnesota is 6-0 ATS in their last six conference games. And 5-1 ATS when playing a team with a winning record. The under is 5-2 in Minnesota’s last seven home games. “The Gophers (8-0) will have their hands full with Penn State (8-0), which comes with quality victories over Michigan, Iowa and Pittsburgh. But while Minnesota has yet to play an, uh, elite team this season, remember that the Gophers closed last year with convincing victories at Wisconsin and against Georgia Tech in a bowl game,” reports Twin Cities.com.

Both of these schools are playing great football on both ends. The Gophers have scored 40 or more points in three of their last four games. And the Lions average 38.5 points per game (12th) though they have been held under 30 in their last three games. Their defenses, as mentioned above, are also among the best. It’s hard to pick, sol let’s get Solomonical, with PSU winning and The U covering.