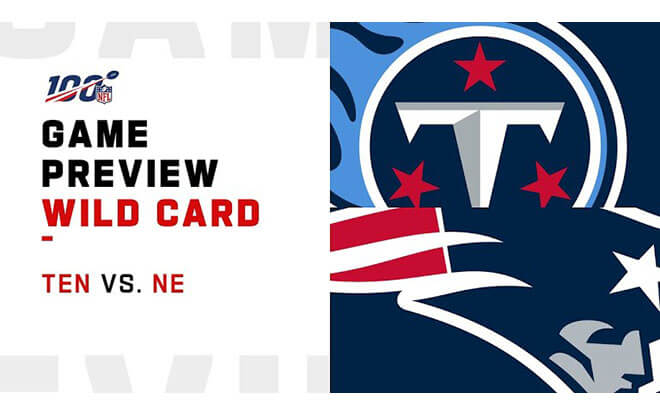 Well, one of the big story lines in this year’s NFL playoffs is the possible “demise” of the New England Patriots. Here is a team that has played in three straight betting Super Bowls. And they have built a “dynasty,” for those who like to use the term loosely. After getting off to a great start in which they played defense at historic levels, there is vulnerability showing with this team. And some observers believe the Tennessee Titans might be there to exploit it.

These clubs will tangle in an AFC wild-card playoff matchup. It will kick off at 8:15 PM ET on Saturday at Gillette Stadium in Foxborough. And guess what? If you’re a BetAnySports customer, you can place wagers while the contest is in progress, using the software provided through Sports Betting Ultra.

Do the numbers lie?

Listen – Tom Brady’s 42 years old, and his contract is up. Are we seeing his last days in a New England uniform? The quarterback rating he’s registered this season was his lowest since 2006. And what a lot of people are mentioning very prominently is that Bill Belichick’s team has never won the Super Bowl after having to play in the wild-card round.

One of the keys to this game will be how New England defends in the red zone. Opponents have scored touchdowns on less than 52% of the red zone trips, putting the Patriots in elite company (fourth in the league).

Here are some more numbers……

In the football playoff betting odds posted on this game, New England is favored:

And don’t forget that you can get a better price than the customary -110 on football if you are signed up with BetAnySports and take advantage of “reduced juice”!

After six games, the Titans were 2-4. And they had been held to seen points or fewer in three of those four losses. Enter Ryan Tannehill, who had worn out his welcome in Miami. Marcus Mariota had become a sitting duck in the pocket. And he just wasn’t finding the receivers downfield. Tannehill has led the team to a 7-3 record. And what is stunning is that he’s averaged more yards per attempt (9.6) than any quarterback in the league. In fact, he’s got a full yard over everybody else. And he also has the top QB rating in the NFL. Rookie wide receiver AJ Brown has been a revelation, averaging 20.2 yards per catch, second in the league.

But we know where this offense starts. Derrick Henry, the Heisman Trophy winner, has 1540 yards. And thus he won the NFL rushing title. We’re not sure New England is prepared to stop him. Last week and we had 211 yards against Houston, in a game Tennessee needed to win.

We are not going to rush to judgment on calling New England the “dead patient” right now. But when you think about it, what they do best on defense is generally designed to shut down receivers. Belichick likes to take away the other teams primary weapon. But the only way to do that here is to stop Henry at the line of scrimmage. We are interested in seeing is the matchup between the rookie Brown and Stephon Gilmore, who is being lauded as perhaps the best quarterback in the game.

It is absolutely essential that New England brings pressure, as Tennessee’s offensive line, while proficient in opening up holes for Henry, doesn’t awful job pass blocking, with the worst sack rate in the league. If you can believe this, over the last two seasons, underdogs in the wild card round have covered all eight times. Tennessee fits the profile of a good dog, as they score TD’s on 75.6% of red zone trips. That is easily the best in the league.

With the Patriots perhaps not in a position to run and hide from this opponent, we will look for another dog cover.

If you like to get a great deal in your sportsbook experience, check out BetAnySports. There you will find “reduced juice,” which helps you avoid having to leave the customary -110 on football. And after the game kicks off, you can continue wagering through the special software provided by Sports Betting Ultra…… And it’s easy to open up an account. Just use your debit or credit card, person-to-person transfer or the virtual currency of Bitcoin, which is fast and easy with her automated system, and NEVER incurs a transaction fee!