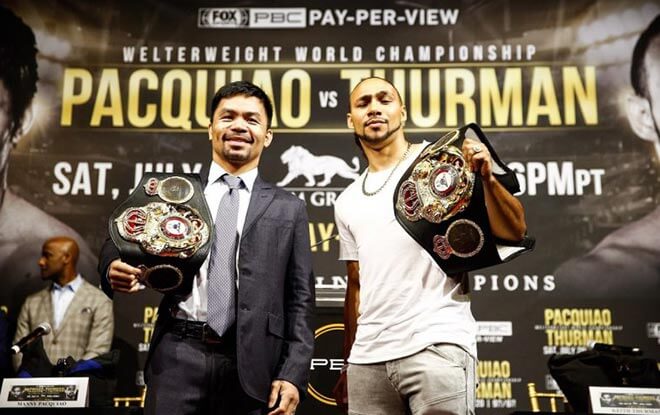 Offshore betting sites favor defending champion Keith Thurman over Manny Pacquiao in their WBA (Super) welterweight title match at the beginning, now Manny Pacquiao is the boxing betting favorite at -160. They say that life imitates art. Methinks Pac-Man is trying to imitate Apollo Creed in Rocky IV. Thurman’s nickname is ‘One Time’ because of his knockout artistry. People could call Manny ‘One Time’ too. As in he may be stepping into a boxing ring one time too many. Sure, they are both champions. But Thurman is a Super welterweight champion. Pac, on the other hand, is just a regular welterweight champ. Additionally, Manny will be without main sparring partner and WBA Oceania and IBF Pan Pacific lightweight champion George Kambosos Jr. Kambosos has been a mainstay of Pac’s camp since the latter boxed Jeff Horn in 2017. While that was a losing effort, Manny went on to beat Lucas Matthysse and Adrien Broner back-to-back.

Many defeated Matthysse via TKO in the 7th round on July 15, 2018 at the Axiata Arena, Kuala Lumpur, Malaysia. Thus winning the aforementioned WBA regular welterweight title. Which he retained against Broner on January 19 MGM Grand Garden Arena, Paradise, Nevada. Broner took Pac all the way to 12 rounds, but the Filipino won by unanimous decision. According to the best online sportsbooks, Manny was the underdog in the Matthysse bout but the favorite versus Broner. And the seesaw continues, um, seesawing, as offshore betting sites have Pac pegged as a 130 dog. Forbes contributor Brian Mazique says that, given the circumstances, this could be Manny’s “most significant win of his career.” But he has to win first, and that’s a tall order. Thurman appears to me to follow original ECW Taz’s mantra; “beat me if you can, survive if I let you.”

And speaking of Keith. He’s undefeated in 29 fights, 22 of which he has won by knockout. His fists are so dangerous that, were he a woman, he wouldn’t be allowed to be a lesbian. Thurman’s younger, faster, stronger, and tougher than Pac. And he has vowed to end the legend’s legendary career.

“I’m gonna make a big statement. You are not gonna want to miss this fight, especially because it’s about to be this man’s last fight,” Thurman said. “I’ve always wanted to fight some of the greatest names in the sport of boxing. Years ago I wanted Floyd Mayweather, I wanted Manny Pacquiao. Floyd’s gone. Pacquiao’s here and he wants the challenge, and I’m very grateful, very happy to be sharing the ring with a legend like Manny Pacquiao. But for those who know boxing and truly understand boxing history, times change. I believe boxing has come to a new era. Floyd is gone. Pacquiao’s here. Come July 20, he will disappear. He’s a legend. He will always be remembered, but I’m going to do to Manny Pacquiao what he did to Oscar De La Hoya. Oscar De La Hoya never fought again. Facts.”

Pick: Forget Rocky IV. Keith is channeling his inner Clubber Lang here. He’s going to go David Copperfield on Manny. “Now you see him, now you don’t”. What’s next? Is he going to exhume Ali and beat up his earthly remains? Seriously though, Thurman hasn’t KO´d anyone since Diego Chavez in 2013. And he looked ring-rusty against Josesito Lopez back in late January. Still, offshore betting sites are right to get behind him. Pac is simply biting off more than he can chew. I believe Thurman is going to make good on his word.