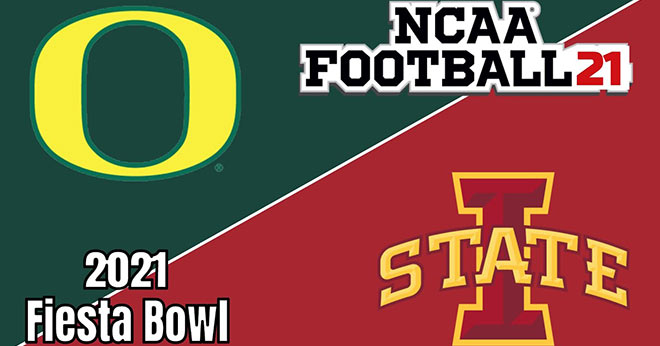 Legit betting sites favor Iowa State by 4.5 points over Oregon when the Cyclones and the Ducks clash in the 2021 Fiesta Bowl.

The Ducks are the best online sportsbooks’ underdogs. Oregon got into the Pacific-12 Conference championship game just because Washington had to withdraw because of coronavirus issues.
Oregon made the most of the chance and defeated host USC 31-24 for the title. That gave the No. 25 Ducks (4-2) the Pac-12’s automatic bid to a New Year’s Six game. They’ll play No. 10 Iowa State (8-3) in the Fiesta Bowl on January 2 in Glendale, Arizona

“We fought this year,” Oregon defensive end Kayvon Thibodeaux, the MVP of the Pac-12 championship game with five tackles and a sack, said. “So many trials and tribulations. So many things that kept popping up. Many excuses we could have made, and we didn’t flinch. We stuck to the script and got it done.”

Oregon won their first three games before straight losses to Oregon State and California. A game with Washington to determine who won the Pac-12 North was canceled. That left the Ducks half-a-game behind the Huskies. They appeared destined for a lower-tier bowl.

But then a virus spike in Washington’s athletic department occurred. The Huskies were out and the Ducks were in. “We were itching to get back to our kind of football, and we did it [against USC],” Oregon head coach Mario Cristobal said. “[We] really just came out with an attitude, came out with a purpose and a mission.”

Ducks starting quarterback Tyler Shough passed for 1,480 yards and 13 touchdowns with five picks in six games. CJ Verdell, Oregon’s lead rusher in the regular season, missed the Pac-12 closer with a knee injury. He could return for the bowl game. The Ducks will be appearing in their third Fiesta Bowl. They beat Colorado in 2002 and Kansas State in 2013.

The ‘Clones are the favorites of legit betting sites. The Cyclones went a different route to their first January bowl game. They lost their season opener to Louisiana. Then the Cyclones won seven of their next eight games prior to a 27-21 loss to Oklahoma in the Big 12 championship.

“From our standpoint, this has been a really special season for our program as we continue to grow over the last couple years,” Iowa State head coach Matt Campbell said. “We’ve got a great senior class made up of 60 seniors that have really stayed the course in this program and really led us every step of the way.”

“When you say Oregon football, you have an immediate respect for who they are and what they’re about,” Campbell added.

It will be a homecoming for the QBs. The two were stars in Arizona high schools. Purdy played for Perry High in Gilbert; Shough for Hamilton High in nearby Chandler. They met two times in high school. Perry, led by Purdy, prevailed 65-63 and 63-60. “Certainly a competitive situation at the high school level and now they get to do it at the collegiate level,” Cristobal said.

According to legit betting site, Iowa State will win and cover the spread. The total will go over.