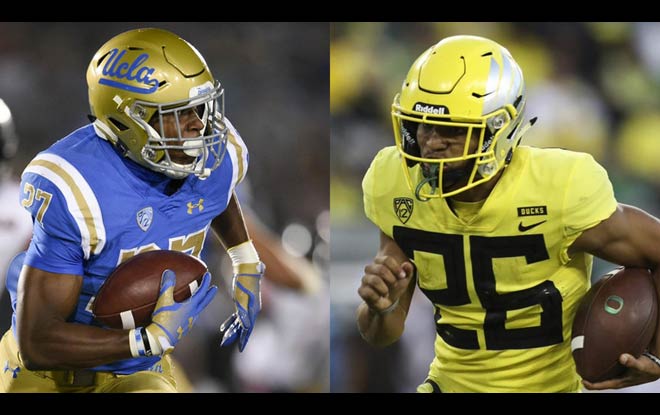 The Oregon Ducks are 10-point home favorites over the UCLA Bruins, per the top online betting sites. According to the best online sportsbooks, the Ducks are putting the fave in favorite. But the Bruins are putting the fun in fundamentals. “It’s just a fundamental game,” UCLA head coach Chip Kelly said, “and you have to do things fundamentally the right way.” I never pegged Chip for a fundamentalist. Though he does often speak of mankind-wiping plagues. Anyway, the Bruins just can’t catch a break. Erstwhile starting QB Dorian Thompson-Robinson got injured just when UCLA was finally starting to win some games. As a result, transfer Wilton Speight made his second start of the season in a 10-41 loss to Utah. Wilton went 20 of 40 for 164 yards with no TDs and two picks. Not the kind of Speight of hand the Bruins need to beat the Ducks.

This will of course mark Kelly’s return to Oregon. He and the Ducks enjoyed their best years together, but that was then and this is now. We’ve gotta focus on the team across the other sideline or we’ll go get beat,” Kelly said. “It’ll be an unbelievable experience. It’s a special stadium, a special fan base, but we better have our focus and concentration on the 2018 Ducks, not worried about what went on from 2009 to 2012.” There’s a pretty good chance you’ll get beat regardless. At least according to the top online betting sites.

This game will also represent head coach Mario Cristobal’s chance to step out of Kelly’s shadow. Since Chip is a shadow of his former self, that shouldn’t be too hard. The Ducks have lost two straight and three out of eight. Their CFP hopes have gone kaput. But they can still become bowl-eligible.