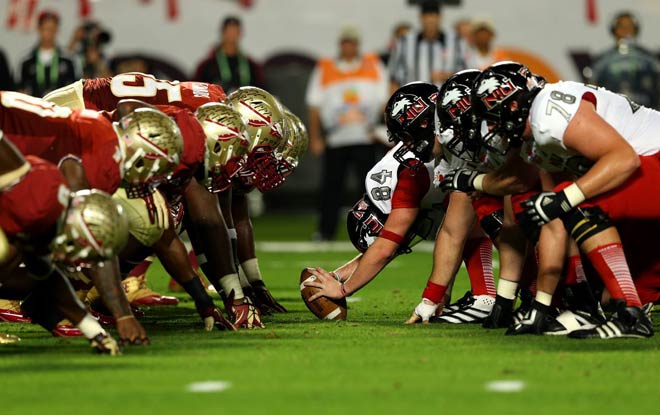 The top legal betting sites believe in the Florida State Seminoles. So does Willy ‘Loman’ Taggart. Well’ that’s a relief. If the head coach doesn’t believe in the team, who will? The best online sportsbooks favor the Seminoles by 10 points over the Northern Illinois Huskies. The Sems are 1-2 SU and 0-3 ATS in the first three games of the season. Florida State had a similarly bad start last season. Only this time they can’t blame it on starting QB Deondre Francois getting injured in the season opener.

“Our fans have every right to have high expectations of our program,” Taggart said. “And I can assure you no one has higher expectations than I do. We have a proud history and tradition of football at FSU, and it is on our shoulders to carry on the torch.” Well, he certainly likes to do things the hard way. Who ever heard of carrying a torch on one’s shoulders?

The Huskies will be looking to avenge their loss in the 2013 Orange Bowl. And what better time than now that the Seminoles are a semi-team at best? “Of course it’s Florida State, but we’ve played a lot of big-name schools, if that’s what you want to call them,” senior wide receiver Spencer Tears said. “I mean, it’s just a name. They strap up just like we do, so we’re going to come play football just like they are.”

The Sems are 0-2 in conference play. They lost to Virginia Tech and Syracuse by an average margin of 22 points. So FSU must be thanking their lucky starts that NIU belongs to the more modest MAC conference. As opposed to Florida State’s own ACC. The Seminoles have bigger problems to deal with, though. Such as fixing an offensive line that is at an all-time worst. The O-line is suffering from a dearth of talent. As is the linebacker position. All things considered, Taggart inherited a very flawed program from Jimbo Fisher. The first-year head coach has a lot of work before the best sport betting sites can take FSU seriously again.