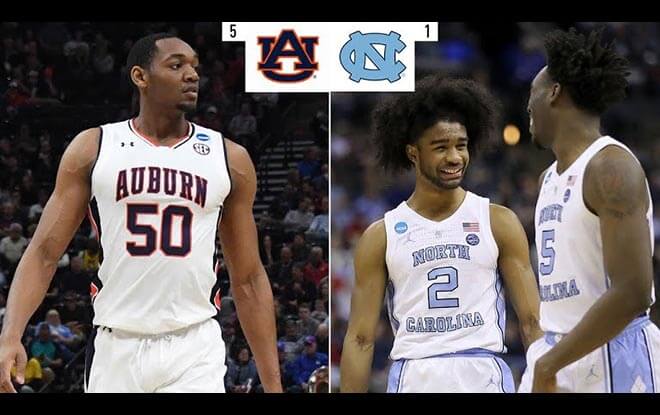 Sport betting sites have the North Carolina Tar Heels defeating the Auburn Tigers by five points in the Sweet 16. UNC failed to cover the spread – 24.5 points according to the best online sportsbooks – against the Iona College Gaels. Nonetheless, the Heels still advanced on the strength of a cushy 15-point lead. In the second round, North Carolina made good by beating Washington 81-59 as 11.5-point chalk. Meanwhile, Auburn continued their hot winning streak. First, the Tigers held off the New Mexico State Aggies 78-77 as six-point faves in the first round. Then they had an easier time winning and covering against the Kansas Jayhawks as two-point favorites. Auburn has won their last 10 games straight. However, they have only covered in 60% of those games. According to Sports Illustrated, this game will be “fast, fun, and crazy.” Just like a night out with Taylor Swift.

Opposing teams want to get their shots in on the first try. Because averaging 44.3 rebounds per game this season, the Tar Heels seldom gives second chances. UNC allowed 72 points per game but made up for it by holding opponents to 41% field goal shooting. And 33% three-point shooting. Also on the offensive side of things, North Carolina causes opponents to turn the ball over 14 times per game. According to sport betting sites, the Tar Heels are 20-8-2 ATS in their last 30 games playing SEC teams. 4-1 ATS in their last five games on Friday. And 5-1 ATS in their last six games overall. The under is 5-1 in UNC’s last six games.

Unlike the actual animal, these Tigers need not attack from close quarters to maul their victims. Auburn converted 25 three-point shots out of 65 attempts against Kansas and New Mexico. In their 10-game winning streak, the Tigers average a winning margin of 7.5 points per game. Auburn is scoring 83.6 points per game and shooting 40% from the arc since the SEC tournament final. The Tigers are 1-4 ATS in their last five games playing ACC schools. 2-6 ATS in their last eight non-conference games. And 6-2 ATS in their last eight games overall. The over is 5-2 in Auburn’s last seven games overall.

“They are the classic North Carolina Tar Heels Basketball team. Unbelievable in transition, great playing fast for as big as they are, dominating rebounders,” head coach Bruce Pearl said. “One of the differences in the game is the fact that they are +9 rebounding margin, we are -4. That’s a big gap right in there. If we can hang in the boards, obviously the way we play, spread it, shoot it. We are not afraid of playing fast with North Carolina. And yet most people know the formula to beat them is make them play in a half-court game but that’s just not our game.”

Pick: You know, you can get a girl to like you by making her laugh. But she’ll stop laughing at some point. And then what? Similarly, a basketball team can pick up wins on sheer three-point shooting. But what happens when they encounter another team, one that can defend the three-point? Methinks that’s what we’re going to find out when the Heels meet the Tigers. All things considered, Auburn is a one-trick pony. And UNC has many tricks in its bag. Users of sport betting sites should take North Carolina and the points.