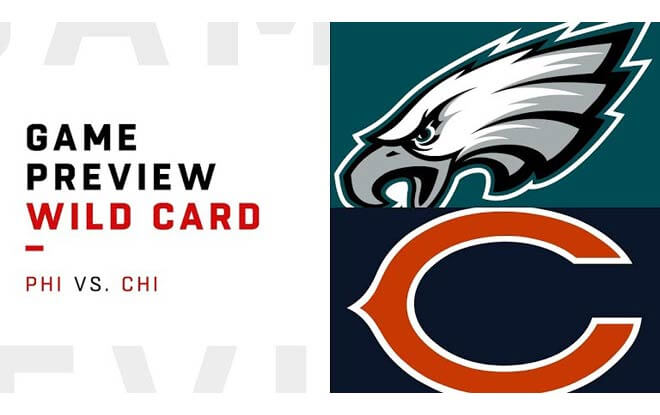 Offshore sportsbooks favor the Chicago Bears over the Philadelphia Eagles by 6.5 points in their NFC wild card game. The Bears renaissance culminated in their first NFC North championship since 2010. First-year head coach Matt Nagy led Chicago to a 12-4 SU and ATS record, according to the best online sportsbooks. This is the first time a debuting coach leads the Bears to at least 10 wins since George Halas. And that was nine years before the market crash resulted in the Great Depression. On the other side of the spectrum we have Philly. The defending Super Bowl champions should thank their lucky starts they’re even in the playoffs. At 4-6 in Week 11 they seemed the Super Bowl hangover’s latest victim. However, the Eagles pulled through with five wins in their last six games. Including upsets over the Texans and Rams.

The Eagles looked more like chickens for most of the season. As in they seemed to become airborne but never quite took flight. That all changed in the last few weeks though. It’s like quote-unquote backup QB Nick Foles is their lucky charm. Kinda like Dumbo’s feather. Philly scored 28.7 points and gained 420 total yards per game in the last three weeks with Foles under center. The defense isn’t too far behind, allowing just 4.8 yards per play in the same span.

Eagles may not be fowl, but they are certainly Foles. As this billboard (not outside Ebbing) clearly demonstrates. Fans surely would like Nick to make Foles of the Eagles.

Philly fans may love Foles, but fans of the offshore sportsbooks love the Bears. Chicago has won straight-up and against-the-spread in seven of their last eight games at home. Furthermore, the Bears are 9-1 ATS in their last 10. Defense has been crucial to that success. Chicago leads the league in scoring defense (17.7 points per game) and rush defense (80.0 yards per game). The Bears are also third total defense (299.7 yards per game). And seventh in pass defense (219.7 yards per game). On offense, starting QB Mitchell Trubisky struggled versus Philly last season. But the Tru struggles more often than not.

Our Game Prediction: The Eagles are threading familiar territory. With Carson Wentz injured, Nick Foles snaps out of his funk. That’s how they won the Super Bowl last year. But that was last year’s Cinderella story. Da Bears are this season’s everyone’s favorite not-quite-underdogs. A healthy Mitch Trubisky may not have been as successful as an injury-prone Wentz. However, Chicago’s forté is defense. And the Bears’ defense should not have too much trouble with Foles. Users of Offshore sportsbooks should take Chicago and the points.