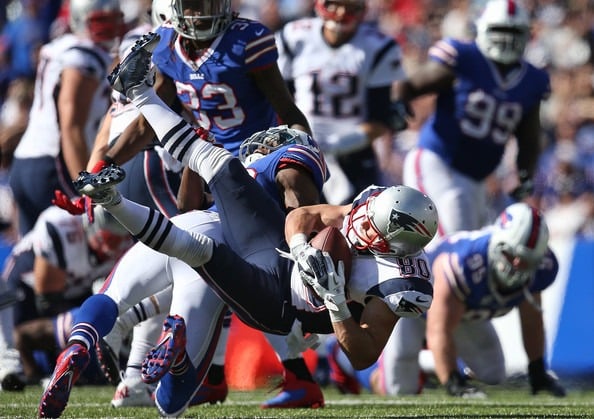 The New England Patriots are 6.5-point road favorites over the Tennessee Titans, as established by online sports betting USA websites. The best online sportsbooks probably shaved a few points off the spread due to the Titans ending their losing streak. The Pats ain’t the Cowboys, though. Even if it makes no difference to Tennessee cornerback Malcolm Butler. “I know I used to play there. I just have to pick up my performance,” he said. “It went great there. It didn’t end well, but those people showed me nothing but love. I love them back. There’s no bad blood.”

There are several other former Patriots who now form part of the Titans organization. Head coach Mike Vrabel. Running back Dion Lewis. And cornerback Logan Ryan. “Those guys don’t know me this week,” New England free safety Devin McCourty said. “So, it’s rough in our friendship. We all talk a good amount during the season but there hasn’t been much interaction during this week.”

The Pats have come into their own. They have won six games straight. Including a 31-17 win over the Green Bay Packers last week. Moreover, they rank 5th in the league with 30.0 points per game. And 9th in total offensive yards with 387.6 per game. New England has scored no fewer than 25 points per game since managing only 10 on Detroit in Week 3. Looking at online sports betting USA trends, the Pats are 16-3 SU and 14-5 ATS in their last 19 games on the road.

“This game pits former Patriots linebacker Mike Vrabel, now the coach of the Titans, against Bill Belichick. That will be interesting,” CBS analyst Pete Prisco said. “The Titans impressed Monday night in beating Dallas, but New England’s defense will slow Marcus Mariota’s little surge and the Patriots will go into Nashville and handle the Titans.”

Speaking of Vrabel facing Belichick. One can see the latter’s influence in that the Titans lead the league with just 37 offensive penalties. The Pats have just 43. Tennessee also excels defensively. They rank No. 1 in points allowed per game with just 17.6. Furthermore, they rank No. 8 in total and passing yards allowed, with 333.5 and 226.2 per game respectively. Their offense, however, is a very different story. They score just 16.8 points per game. When they score, that is. The Ravens held them to zero points in Week 6.

Online sports betting USA trends inform us that the Titans are 3-9 ATS in their last 12 games as dogs of at least seven points. Meanwhile, the Pats are 9-3 ATS as favorites of at least seven points. Which the minimum amount by which four of their last six wins have been decided. Additionally, they 9-0 SU and 8-1 ATS in their last nine games before going on bye. Those eight wins have been by an average margin of 22.3 points per game. That’s just in case you need reasons to back the Patriots. Other than the fact that they are the Patriots, that is.