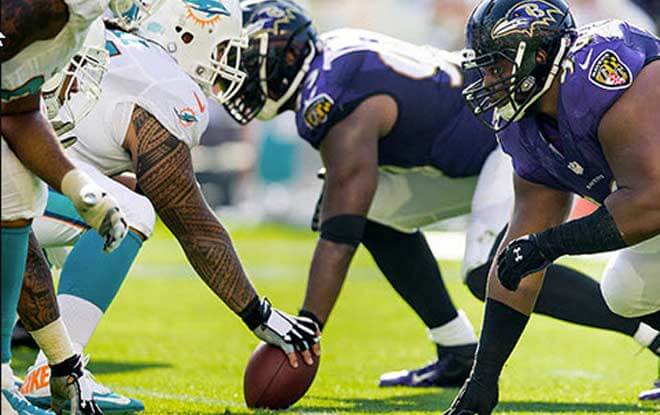 Sportsbook sites are favoring the Baltimore Ravens over the Miami Dolphins by 4.5 points in their 2019 regular season-opening clash. The age of Lamar Jackson officially started when the Ravens exiled Joe Flacco to Denver in March. Flacco started nine games in 2018, yet Jackson played in all 16. Baltimore went, according to the best online sportsbooks, 10-7 SU and 8-9 ATS last season, including the playoffs.

Meanwhile, the Dolphins finished 7-9 and missed the postseason for the second consecutive year. Things are looking up for Miami, though. They traded Ryan Tannehill to the Tennessee Titans and kicked Adam Gase to the curb. Conversely, the Dolphins hired former New England Patriots assistant coach Brian Flores as their new head coach. And acquired QB Josh ‘The Chosen’ Rosen from the Arizona Cardinals. These moves point to a new mentality within the Miami organization. And to paraphrase Yogi Berra, 90% of the game is mental and the other half is physical.

Jackson has struggled with his passing in the first week of organized team activities. It would be easy to fail to notice the young QB’s weaknesses. After all, next to Robert Griffin III, any quarterback is going to look a lot better than he actually is. However, Jackson is well aware of his piss poor performance. “I’d say, my first day, I sucked. Second day, I did better. Today, it was all right but it could’ve been better,” Jackson said. “I’m always trying to be perfect in practice.”

Moreover, Ravens columnist John Eisenberg advises not to jump to conclusions. “For starters, when games are being won and lost in September and October, no one is going to remember what happened in May and June,” Eisenberg writes. “But more importantly, practice isn’t the place for Jackson to unleash the skills that make him so unique and valuable. His eye-popping speed. His elusiveness. The creativity and instincts that make him so dangerous when a play breaks downs.” This is something to which sportsbook sites users should pay heed.

Not just sportsbook sites oddsmakers are down on the Dolphins. According to the Palm Beach Post, “One ESPN analyst projected Miami as an underdog in every single game this season.” the periodical then goes on to list five reasons that Miami will not be the worst team in 2019. Including the aforementioned coaching change and the signing of QB Ryan Fitzpatrick. As well as the fact that “this is a contract season for [Kenyan] Drake,” and as such, “we’ll see more of Drake in his fourth season.”

I tend to agree with the Palm Beach Post. The Dolphins will not be the best team of the new season. But neither are they going to be the worst. And that’s because Gase will no longer be weighing them down (instead he will be finishing what Todd Bowles started). Historically, individuals who have coached under Bill Belichick don’t fare well as other teams’ head coaches. But Flores will be flanked by brand new offensive and defensive coordinators. Once again bringing forth that sense of renovation that is permeating Miami. And last but not least, you can never discount Fitzmagic. Just last year he became the first quarterback in history to throw 400 yards or more in three straight games. I’m not saying the Dolphins are going to straight-up upset the Ravens. However, I believe they can, at home, make it closer than those 4.5 points set by sportsbook sites.